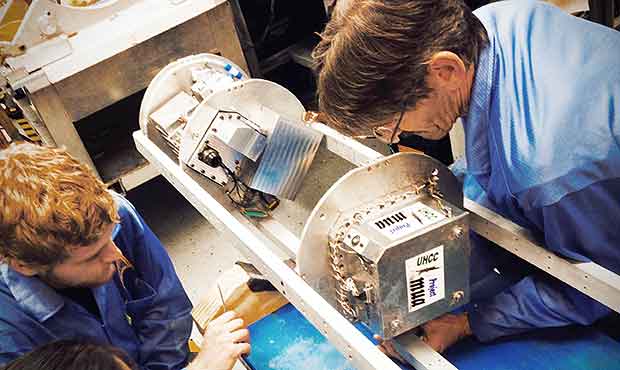 Kauaʻi Community College student Nick Herrmann was pleasantly surprised to be mistaken for a NASA employee. In June, Herrmann was one of five University of Hawaiʻi Community College students who traveled to NASA’s Wallops Flight Facility in Virgina to test the scientific payload they had developed in order to ensure that their instruments are ready to be launched in August.

Herrmann helped to integrate the UHCC payload onto the main rocket and, like the other students there, was wearing an official blue jacket to protect against electrostatic discharge when someone walked up to him and started talking rocket-scientist shop. “It was cool!” recounted Herrmann.

Windward CC faculty member Jacob Hudson was proud of how the UH Community College students were able to work with other university students from much bigger schools with greater resources. Hudson said, “They were dealing with university students who were several years more advanced and were holding their own in concept discussions and work ethic.”

“I’ve learned a lot about how NASA operates and all the procedures they have to go through to launch something into space,” said Kalanikapu Copp from Windward CC.

Matthew Mau, a Honolulu CC student concurred, “People here will talk about something over and over again, until the idea is perfected.”

One of the highlights was viewing an early morning rocket launch, similar to what will occur when their scientific payload is launched into space in August.

“I’ve never had an interest in aerospace engineering or ‘space stuff’ before taking on this internship,” said Windward CC student Elena Barbour. “This has shown me that even if I feel like I can’t do something that seems too hard or out of my league, I should do it anyway.”

The scientific instrument that forms the main component of Project Imua’s payload consists of a UV spectrometer that will analyze the intensity of the sun’s ultraviolet radiation before it enters Earth’s atmosphere. The data could have implications regarding climate.

On August 11, 2015 a rocket carrying Project Imua’s payload will be launched from Wallops into suborbital flight. The UH Community College team was the only community college whose payload was selected for this launch.

Honolulu CC’s Debora Pei said, “The excellent progress we have made with Project Imua demonstrates how, with adequate funding and solid opportunities, Hawaiʻi students can compete side-by-side with other great minds all across the country.”