From miniature folds to life-size sculptures, the Japanese art of origami can come in a variety of unique shapes, sizes and materials. The ʻImiloa Astronomy Center of the University of Hawaiʻi at Hilo presents Epic Origami, a new temporary exhibit that will explore the art and science of origami and how the ancient craft is making advances in astronomy, medicine and the automotive industry. The exhibit, which runs from July 5 through September 27, will feature origami artists from around the world. 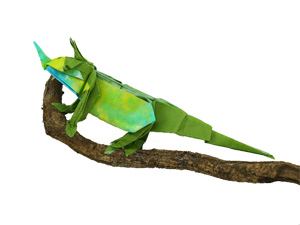 Bonnie Cherni’s is an avid student of origami artist John Montroll’s designs and was inspired to fold origami from age of fifteen. She is the leading artist for this exhibit and has collaborated with guest artists from around the world, creating everything from miniature to life-sized sculptures, in mediums ranging from paper, aluminum, copper and canvas. Her art embodies the idea of “folding sturdy sculptures that can live out in the real world.”

Vietnamese artist Nguyen Hung Cuong lives in Hanoi and folds many of his expressive designs using a Vietnamese paper with a waxy finish called do. He has been folding since the young age of five and has been featured in many origami books with his incredibly detailed pieces.

Terry Nicolas is a professional origami artist who resides in Paris, France. He is an accomplished author and creator of origami-shop.us, one of the most popular origami sites in the world.

Steven Epstein resides on Hawaiʻi Island. With a degree in computer science and minor in math, Epstein has fun bringing math to life with his intricate modular origami pieces.

Local artist Shannon Nakaya is a highly recognized bird surgeon and veterinarian who applies her understanding of anatomical structure and function to folding complex origami.

In conjunction with this exhibit, the award-winning film Between the Folds will be shown daily in the planetarium at 11 a.m. (not full dome, but letterbox format). This documentary paints a striking portrait of the remarkable artistic and scientific creativity that fuels the ever-changing art of origami, fusing science and sculpture, form and function and ancient and new.

The exhibit will officially open on Sunday, July 5 at 9 a.m. with two showings of Between the Folds at 10 a.m and 11 a.m. and origami folding stations available throughout the day. From 11:30 a.m. to 1:30 p.m. ʻImiloa members are invited to a private pizza lunch and exclusive origami folding activities with Cherni.

Regular exhibit guests are also encouraged to participate in the origami scavenger hunt and try their hand at creating their own origami at the origami folding station.

Admission to Epic Origami and Between the Folds is included in the general admission fee of $17.50 for adults and $9.50 for children. Kamaʻaina prices are available and ʻImiloa members receive free admission.