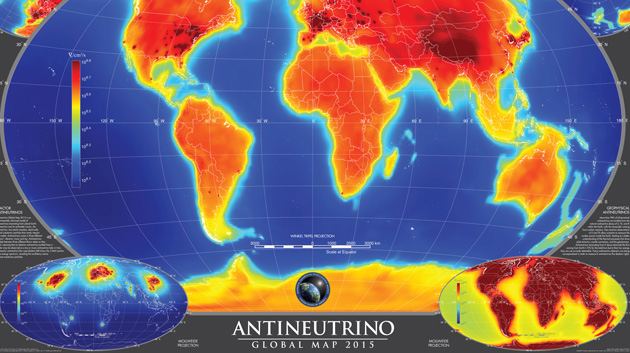 A team of researchers led by scientists at the National Geospatial-Intelligence Agency (NGA) published a new map on September 1 that characterizes the Earth’s radioactivity. The Antineutrino Global Map 2015 (AGM2015) can inform the strategic placement of detectors that aid in identifying undeclared nuclear reactors.

The neutrino and its antimatter cousin, the antineutrino, are subatomic particles that are produced by stars of all types, including the Sun, as well as Earth’s atmosphere, supernovae, nuclear reactors and radioactive materials. AGM2015 is the first model of the Earth’s natural and manmade antineutrino flux, using open source geophysical data sets and publicly available international antineutrino detection observational data.

“This antineutrino map may mark the start of a new scientific subfield,” said UH Professor John Learned. “This map is similar to making the first map of North America after Columbus arrived, in that those early explorers had fragmentary information from a few scattered outings and used it to create a comprehensive tool for many others.”

The map and accompanying research paper are published in Nature’s Scientific Reports. For more information and to download the map, go to the NGA website.

The study of geo-neutrinos, needed to support reactor detection, is also a gateway to meaningful geologic research into the Earth’s heat sources and geodynamics. Geophysical antineutrinos, or geo-neutrinos, are produced by naturally occurring radioisotopes in the Earth, revealing information about the planet’s interior. Geo-neutrino measurements are essential in characterizing the Earth’s radiogenic power across geologic time and in improving our understanding of planetary formation processes in the early solar nebula.

The authors expect to release periodic updates to the original AGM2015 as future oscillation measurements, crust/mantle model advancements, and ongoing construction and decommissioning of nuclear reactors will eventually change the map.

AGM2015 is a product of NGA’s antineutrino research program. In addition to mapping out the Earth’s antineutrino flux, NGA and UH have developed a small prototype antineutrino detector that is currently being tested at the National Institute of Standards and Technology in Gaithersburg, Maryland.