When observing the sky on a very clear, dark night, the soft glow of the Milky Way with its thousands of stars can be seen with the naked eye. Over the centuries since Galileo Galilei first pointed a telescope at the galaxy in 1609, this awe-inspiring yet easily visible panorama was our cosmos, our celestial world. With each new scientific discovery, however, this cosmos has grown dramatically, increasing rapidly over the last several decades. As humans look deeper into space, the earlier phases of the cosmos are unveiled, but even with the largest telescopes, only a tiny fraction of the vast expanse of the Universe can be seen.

In Astronomy’s Limitless Journey, astrophysicist and University of Hawaiʻi at Mānoa Institute for Astronomy director Günther Hasinger takes readers on a journey to the far reaches of the Universe—an exciting time travel that begins with the incredibly hot fireball of the Big Bang roughly 13.8 billion years ago and ends in distant aeons with its cold, dark demise. In between lie the times in which extensive structures, galaxies, stars and planets form. 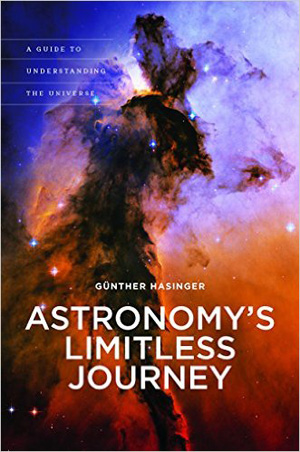 As the field of astrophysics and cosmology experiences a “golden age” due to larger telescopes, faster computers and more sophisticated algorithms, fundamental changes are taking place in the understanding of space and time and of the origin and future of the Universe. In Astronomy’s Limitless Journey, a new University of Hawaiʻi Press book, Hasinger thoroughly explains these fascinating revelations and describes the methods utilized in modern astrophysics.

He cautions, however, that the boundaries between knowledge and ignorance shift constantly; where our knowledge is so incomplete such that we can only speculate, the journey becomes shaky.

Indeed, every new discovery opens a further door to the unknown and with every answered question, researchers discover more locked doors still to be opened.

Günther Hasinger is director of the Institute for Astronomy at UH Mānoa. His 2007 book, Das Schicksal des Universums (Fate of the Universe), won the Science Book of the Year award in Germany.