The University of Hawaiʻi at Mānoa Hawaiʻi Space Flight Laboratory (HSFL) is currently preparing for five space launches in the next two years with more opportunities on the horizon.

“Hawaiʻi and the University of Hawaiʻi are now considered players in the aerospace industry,” said HSFL Director Luke Flynn.

Hawaiʻi on the aerospace map

HSFL had a key role in the first attempted space launch from Hawaiʻi in November 2015 from Kauaʻi’s Pacific Missile Range Facility (PMRF). Though the launch was unsuccessful, the years of research and work leading up to it created a foundation that has put Hawaiʻi on the aerospace map.

HSFL designed and constructed the primary payload for the mission, a hyperspectral imaging satellite. More than 150 UH students gained real world experience building the sophisticated satellite that passed a rigorous NASA-based testing process before it was approved for a space launch.

“It proved that UH has the equipment and expertise to build and test small spacecraft,” said Flynn. “HSFL has clean-room facilities and small-satellite test equipment to fully train the next generation of small-satellite engineers.”

Hawaiʻi now has a rocket launch pad and a rail launcher at PMRF that were built for the November 2015 mission, critical assets for future space launches.

“HSFL received two commercial queries regarding use of the launcher (at PMRF) after the mission,” said Flynn, adding that private sector interest in deploying small satellites for lower costs is very high. “It’s been reported that SpaceX alone wants to send up 4,000 small communications satellites in the future. Certainly, the number of launches and launch sites in the U.S. and abroad will have to grow to meet this demand.”

HSFL received $29 million in federal funding over the past seven years for the November 2015 launch attempt and invested $2 million in university funds in equipment that is being used to support future small-satellite development across the UH System. 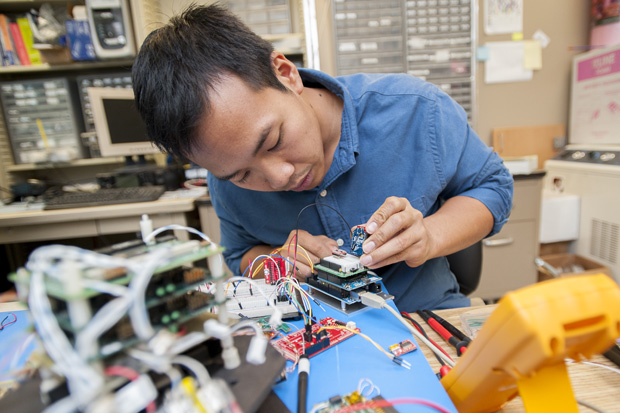 A group of HSFL students are currently working on a suborbital payload launch from New Mexico scheduled for spring 2016. The payload is a new on-board computing system that will be used in future HSFL small satellites.

Two other suborbital launches involve students from four UH community colleges. That program is called Project Imua and it successfully launched its first payload from the NASA Wallops Flight Facility in Virginia in August 2015. A second launch is scheduled for August 2016.

HSFL is also working on two orbital satellites that will be launched as part of the NASA CubeSat Launch Initiative in 2017. The Neutron-1 satellite will detect neutrons that are incoming to the Earth from space. The GOSTE-1 satellite will measure atmospheric water. The NASA CubeSat Launch Initiative is particularly exciting for HSFL because the program offers free launch services for university cubesats.

HSFL was established in May 2007 within the School of Ocean and Earth Science and Technology and the College of Engineering at UH Mānoa.