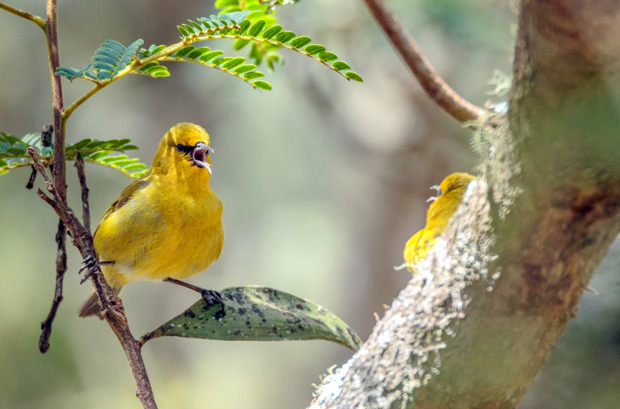 Researchers at the bioacoustics lab at the University of Hawaiʻi at Hilo are quickly making great strides in advancing the field of ecology. The lab was established just last year by Patrick Hart, professor of biology, along with UH Hilo colleagues Donald Price, also a professor of biology, and Adam Pack, an associate professor of psychology who specializes in marine mammal behavior. Already the research and technology being developed at the lab are making a big impact.

The lab goes by the Hawaiian name LOHE, which means “to perceive with the ear” and is an acronym for Listening Observatory for Hawaiian Ecosystems. The facility is made possible through a Centers of Research Excellence in Science and Technology grant awarded by the National Science Foundation and is currently home to several research projects.

“We’re using sound in lots of different aspects of ecology,” explains Hart about the mission behind the lab and the research being conducted there. “We’re trying to use sound to better understand the distribution and abundance of animals and how the richness of their vocal repertoire changes with population size and across the landscape.”

A new and innovative algorithm

A new algorithm developed by a researcher at the LOHE lab—to identify the song of specific bird species—boasts efficiency and limitless potential for science.

A recent study undertaken by a research team at the lab, “Bioacoustics for Species Management: Two Case Studies with a Hawaiian Forest Bird”—published in the journal Ecology and Evolution—used the new algorithm to automatically detect native ʻamakihi bird songs out of the cacophony of sounds in the forest.

The algorithm was written and developed by principal investigator Esther Sebastián-González, who is doing post-doctoral work at UH Hilo. Hart is co-principal investigator along with Joshua Pang-Ching and Jomar M. Barbosa from the Department of Global Ecology at the Carnegie Institution for Science, Stanford, California.

With the new algorithm, detection of particular bird songs is much faster, more efficient, and highly accurate—and it’s easy to use. As in the case of the ʻamakihi study, Sebastián-González and her team used the algorithm to confirm the existence of the ʻamakihi, a common honeycreeper, in certain areas where species confirmation was previously unknown.

Sebastián-González says that with a few adjustments, the algorithm can be tailored to detect any animal species. With the information and codes for the algorithm available online, “Everyone can use it,” she says.

Two other researchers utilizing the LOHE lab are Nicole Fernandez and Ann Tanimoto.

Fernandez is a second year graduate student in the tropical conservation biology and environmental science program at UH Hilo and is working with Hart. She is studying how isolation and habitat affect native Hawaiian ʻōmaʻo birds and their songs.

Tanimoto completed her thesis on the ʻalalā, also known as the Hawaiian crow, and has received her master of science in tropical conservation biology and environmental science from UH Hilo. The ʻalalā is now extinct in the wild and found only in captivity. They are currently being successfully bred in captivity for future release.

“The ʻalalā are extremely intelligent and have an amazing variation of vocalizations in their repertoire,” says Tanimoto.

The scientists explain that a large part of a bird’s brain is devoted to the production and interpretation of sound. Hart says, “We know that vocal communication is an important part of their behavior, but it’s really not understood very well and there have been few studies done on Hawaiian birds.”

For the full story, read the UH Hilo Stories article.

—A UH Hilo Stories article by Lara Hughes, a junior at UH Hilo majoring in business administration and a public information intern in the UH Hilo Office of the Chancellor