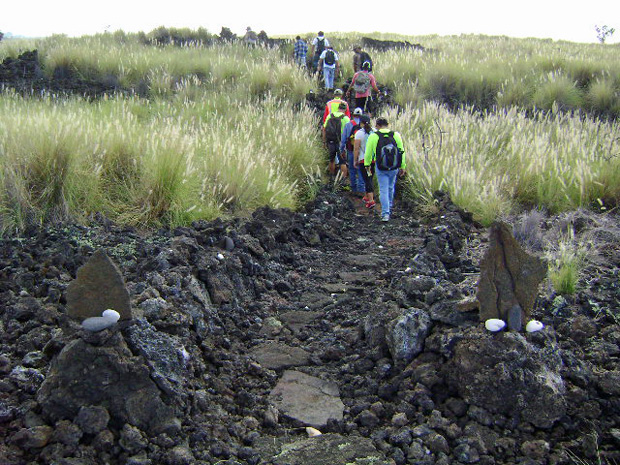 The trail—which features petroglyphs, caves, and ancient lama trees—is next to the new Hawaiʻi Community College–Pālamanui campus in Kona. Until recently the trail was overgrown with invasive fountain grass and forgotten. 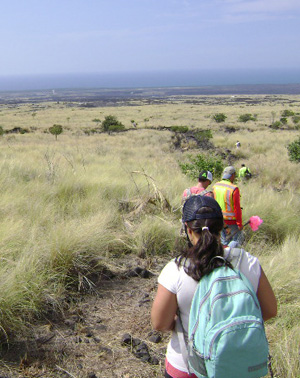 Since June 2014, trail expert and Hawaiʻi CC–Pālamanui humanities lecturer Richard Stevens has been leading an effort to restore the mauka-to-makai pathway. Many students and community volunteers have ripped out fountain grass and moved rocks to help reclaim the trail from nature.

Now the goal is to keep track of the trail, and that’s where the students enrolled in Introduction to GIS and GPS come in.

On a hot Saturday morning on November 14, 2015, the Hawaiʻi CC students used their handheld GPS devices to mark significant locations along the trail, including the petroglyphs and caves.

“Now we’re going to take that data and put it into a GIS map and basically create a base map of the trail and all the significant locations,” said Victor Rasgado, a geomatics lecturer at Hawaiʻi CC. “So we’re preserving that trail, and we’re doing it with new technologies.”

Sterling Chow, one of the students in the class, said he and his classmates gathered GPS data, took detailed notes, and snapped pictures in order to compile enough information to create a map.

“It’s a great learning tool, being out there, tying the information together, and accurately describing what you saw,” said Chow.

The trail is on land owned by Pālamanui, LLC, which is the private development company planning a mixed-use community next to the campus. Preservation of the trail is part of the company’s cultural resource management plan.

Learning from this cultural treasure

The GIS and GPS class’ excursion is just the latest example of college faculty using the trail as a classroom. Stevens has taken his writing and history students there, and the Hawaiʻi CC–Pālamanui campus has plans to continue using it as an educational resource.

“Trails are cultural treasures, living artifacts showing the ingenuity and survivability of the ancient Hawaiians in nature,” said Stevens. “Recording those treasures on maps helps us not lose the lessons they have to teach us.”

The Introduction to GIS and GPS course is one of four classes Hawaiʻi CC students take in order to earn a certificate in geospatial technology. The courses and the certificate are part of the Architectural, Engineering and CAD Technologies program at Hawaiʻi CC, which offers three certificates and an Associate in Applied Science degree.