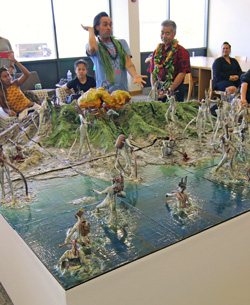 They were welcomed with an oli by UH West Oʻahu student services and PIKO Project faculty and staff, followed by a presentation by Interim Chancellor Doris Ching about UH West Oʻahu student enrollment and academic programs including the bachelor’s degree in humanities and bachelor’s degree in applied science with a concentration in creative media.

Creative media is one of the fastest growing programs at UH West Oʻahu thanks in part to a generous $1 million donation from the Roy and Hilda Takeyama Foundation. The gift is used for tuition, books, fees, travel, computer hardware and software, student internships and student scholarships. It will also be used to outfit the anticipated Academy for Creative Media building with state-of-the-art equipment.

The governor and first lady were treated to a 3D graphic display on the UH West Oʻahu CyberCANOE (Collaborative Analytics Navigation and Observation Environment) that is used to carry picture and sound between UH classrooms so students on different campuses may see each other and work together sharing rich media and information. They also toured the ʻUluʻulu, Henry K. Giugni Moving Image Archive of Hawaiʻi and were the first to preview the UH West Oʻahu creative media student-produced trailer to be released at the opening of the new Regal Theater in Kapolei this April.