The Association for Political and Legal Anthropology has selected Leviathans at the Gold Mine: Creating Indigenous and Corporate Actors in Papua New Guinea as the winning entry for the 2016 APLA Book Prize competition. Written by University of Hawaiʻi at Mānoa Associate Professor Alex Golub the book offers a captivating ethnographic account of the complex relationship between the Ipili, an indigenous Papua New Guinea group, and the country’s Porgera Gold Mine, which is the world’s third largest gold mine.

Leviathans at the Gold Mine provides readers with a fascinating look at the daily life, character, struggles and interactions between individuals from the Ipili and Porgera Gold Mine. Touching upon issues of wealth distribution and political capital, the book offers a sensitive analysis of the situation that brings forth broader-based theoretical and political questions about representation, political mobilization, corporations and capital.

“I’m so proud to bring this award home to Mānoa. The anthropology department is showing the world that Mānoa is a center of excellence not just of Pacific studies, but the study of law and politics more widely. It’s great to be able to be part of that work,” said Golub. 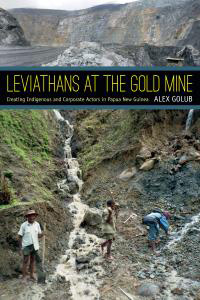 His current work combines two different, but connected streams of research—a study of social change and the mining industry in Papua New Guinea with a focus on the Porgera Gold Mine in the Enga province and the study of the online video game World of Warcraft and how players bring the culture of their actual lives into virtual worlds. Both areas of research focus on how the politics of small group interaction are shaped by the cultural expectations of political actors.

Golub is also one of the co-founders of savageminds.org, a popular cultural anthropology blog.

More about Association for Political and Legal Anthropology

The Association for Political and Legal Anthropology is a section of the Anthropological Association. APLA members share interests in issues of contemporary importance in the fields of political and legal anthropology. APLA hold an annual Book Prize competition recognizing books that best exemplifies creativity and rigor in the ethnographic exploration of politics, law and/or their interstices.