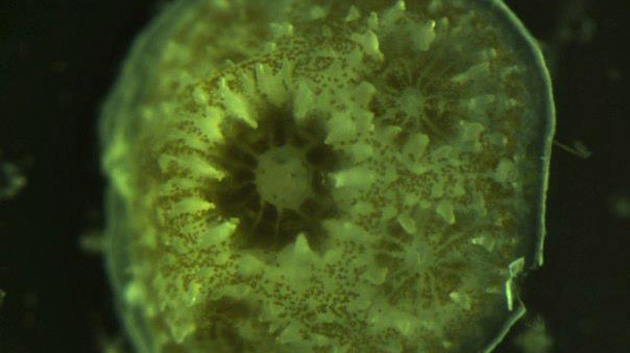 In a study published today, researchers from the University of Hawaiʻi at Mānoa, Rutgers University and the University of Haifa identified key and novel components of the molecular “toolkit” that allow corals to build their skeletons (called biomineralization) and described when—in the transformation from floating larvae to coral skeleton—these components are used.

Corals are the sum of a symbiotic relationship between cnidarian animals and millions of single-celled algae that live inside their tissues. These symbiotic algae photosynthesize and provide the energy corals need to build their skeletons. In turn, the skeletons form the structure and framework of coral reefs that provide habitat to fishes and other animals. Coral reef are so large they can be seen from space, and generate goods and services valued on the order of billions of dollars annually.

The reefs of Kāneʻohe Bay, Hawaiʻi around the Hawaiʻi Institute of Marine Biology (HIMB) at the UH Mānoa School of Ocean and Earth Science and Technology provided the ideal natural coral study system.

Revealing the mechanics of transformation

Corals release their offspring as swimming larvae with no skeleton. The larvae change shape, settle onto the reef, and start to build their skeletons. Putnam and Ruth Gates, senior researcher and director of HIMB, collaborated with scientists from Rutgers University, and the University of Haifa to examine gene expression and the production of proteins at these different life stages.

“Together, we described components that were ‘off’ or ‘on’ before and after the first skeletal structures were built,” said Putnam. “This approach revealed the quantity and location of important components of the biomineralization machinery, knowledge that allows them to be developed as biomarkers for studies of coral growth in the future.”

Coral reefs are undergoing mass mortality due to high seawater temperatures and ocean acidification is diminishing their capacity for skeletal growth. These global stressors are superimposed on the local threats of coastal development, excess nutrients and overfishing; and all combine to threaten the persistence of corals as a functional ecosystem.

The team is currently working to further describe these novel components of the biomineralization machine in corals and how they are regulated under increased environmental stress.