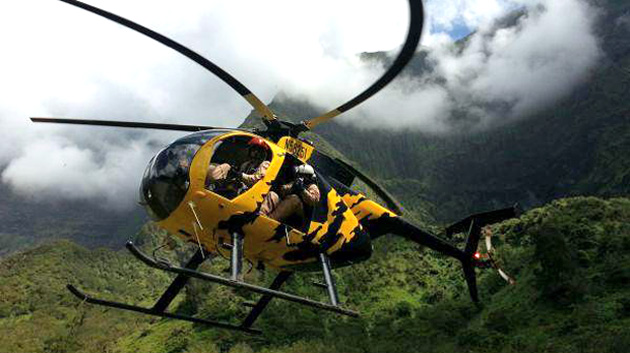 James Leary, associate professor in the College of Tropical Agriculture and Human Resources, is battling invasive species with his innovative Herbicide Ballistic Technology (HBT™). Leary has invented a way to adapt readily available pneumatic paintball guns to shoot small gelatin capsules filled with herbicide to control invasive plants and trees. In Maui, Leary’s main focus is miconia, an invasive weed that shades out native plants and damages the ecosystem.

The paintballs, custom made by Nelson Paint Company, can be used to treat hard-to-reach areas like cliffs and ravines. The technology also reduces disturbance of remote areas and is safer for the person applying the herbicide because the chemical is safely contained in the small projectiles.

Further, this approach allows for targeted and cost-effective treatment of invasive plant species. While riding in a helicopter, Leary can treat an individual invasive plant from a range of up to 100 feet.

“We’re able to, with our efforts, protect an acre of forested watershed at less than $10,” Leary said in a recent news report. “So it’s a very economical approach because of the efficiency the helicopter provides.”

In a previously published paper, Leary, in collaboration with the Maui Invasive Species Committee, described how more than 4,000 of the invasive weed trees were targeted and eliminated in remote areas of Maui watershed in just over a year using the revolutionary HBT.