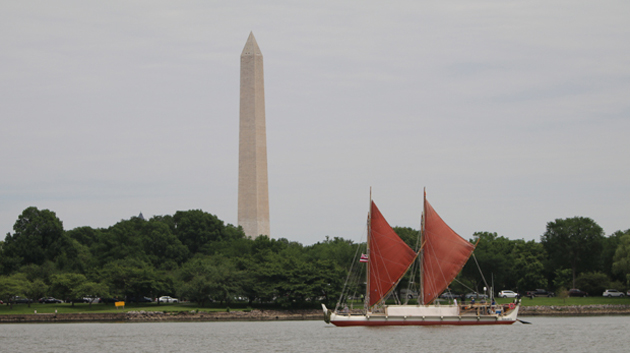 As a longtime partner of the Polynesian Voyaging Society, many University of Hawaiʻi students, faculty and staff actively participate in the robust education and community engagement efforts of Hōkūleʻa’s Worldwide Voyage, and the leg up the East Coast of the United States is no exception.

Master navigator Kālepa Baybayan, navigator in residence at the University of Hawaiʻi’s ʻImiloa Astronomy Center, served as captain for the Hōkūleʻa’s historic sail to Washington >D.C. Baybayan also participated in various presentations and exchanges and given talks about celestial navigation at ports along the East Coast.

“Navigation has taught me to be an educator and a mentor so all I am doing is fulfilling my role and just presenting material in different venues,” said Baybayan. “So I am serving as a traditional navigator but also at multiple venues.”

Linda Furuto of the University of Hawaiʻi at Mānoa’s College of Education and Mark Kimura of Honolulu Community College’s Marine Education and Training Center have also served as crew members aboard Hōkūleʻa, helping to spread the message of mālama honua, or caring for Island Earth. University of Hawaiʻi President David Lassner was one of the select crewmembers sailing from Washington D.C. to New York.

“I know from many other experiences I have had in life that you can’t learn unless you participate,” said Lassner. “And I believe this voyage is really important to Hawaiʻi and that makes it important to the university and our role in Hawaiʻi.”

Lassner added, “To me, that’s what the World Wide Voyage and mālama honua stand for—sustainability, indigenous serving, education, research and our service to the community. So I ask, ‘Why wouldn’t we be involved?’ It’s an incredible opportunity to do exactly what the University of Hawaiʻi is supposed to be doing.”

The Mālama Honua Woldwide Voyage circumnavigating the globe began in 2013 and is scheduled to continue through 2017 when a new generation of navigators will take the helm.