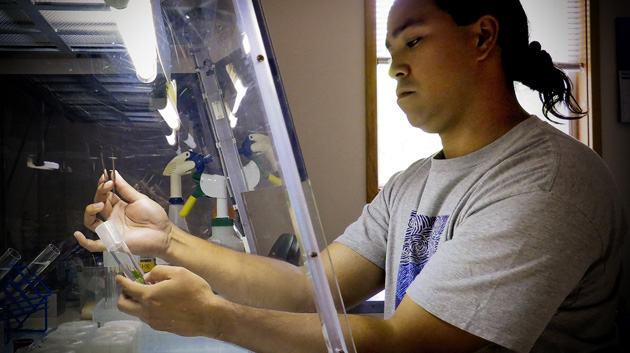 With more than 400 federally endangered or threatened plants, Hawaiʻi is considered an “endangered species hotspot.” This means the tissue culture work of the Hawaiian Rare Plant Program Micropropagation Laboratory at the University of Hawaiʻi at Mānoa’s Lyon Arboretum is critical.

“If you lose one species it’s going to be a ripple effect,” said Erin King, a Hawaiian Rare Plant Program student assistant from UH Mānoa who works at the laboratory. “You are going to lose the bugs the birds, and all the other things that depend on this one native plant that might not seem important, but for all these other species, it’s very important.”

Bontanical support student assistant Keoni Kikala from Windward Community College, likens rare plant species to the rivets holding an airplane together. “You’ll never know when you will lose that one component where it will all fall apart,” he cautioned.

This important program is currently housed in an almost 100-year-old building that is termite ridden. Because it holds important rare plant cultures, the structure can’t be fumigated, so staff has resorted to plugging termite holes with coins and calk.

The good news is construction is underway for a new $2.5-million facility that will expand the arboretum’s important efforts to store, propagate and eventually restore many of Hawaiʻi’s native plants that are in jeopardy.

“It really ensures that we can safeguard some of this germplasm for the future, when there are available sites for restoration,” said Nellie Sugii, Hawaiian Rare Plant Program manager. “We can withdraw some of these plants and put them back into the wild.”

It is being called a model public-private partnership, after receiving funding from the span aria-label=”Hauoli”>Hauʻoli Mau Loa Foundation, Chamberlin Foundation, Cooke Foundation, the Friends of Lyon Arboretum, the Hawaiʻi Legislature and the University of Hawaiʻi at Mānoa.

“This is one of the most important bridges that we build from the university to the community,” noted University of Hawaiʻi at Mānoa Chancellor Robert Bley-Vroman.

Construction of the micropropagation laboratory is expected to be completed in 2017.