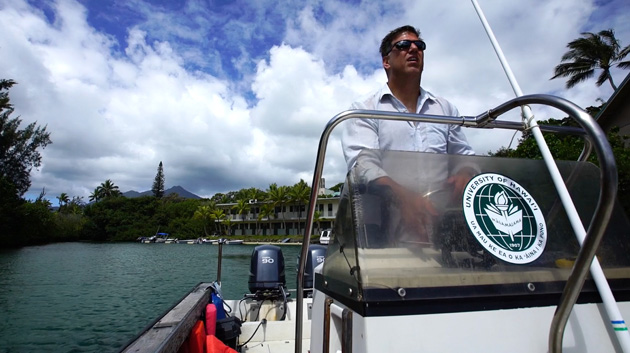 “The traditional way of surveying coral reefs is to put a mask and scuba tank on,” explained Eric J. Hochberg, an associate scientist from Bermuda Institute of Ocean Sciences and the principal investigator on the project. “If you wanted to survey Kāneʻohe Bay in detail, complete coverage, it would take you months, a year or more. An airplane with the right instrumentation on it would cover it in five seconds.”

UH is serving as the base for ocean operations and is one of 12 research institutions hosting experiments in support of the mission.

A project made possible by NASA, which is known more for its focus on space research and travel.

“People are really surprised to know that the majority of NASA’s portfolio, are in fact is Earth missions through satellite, through airborne, the whole gambit,” said Michelle Gierach, the project scientist from NASA’s Jet Propulsion Laboratory.

The mission of the Coral Reef Airborne Laboratory is to collect detailed data needed to better understand how coral reefs are being influenced by environmental factors. The project is an example of important, ongoing research being done at UH’s Hawaiʻi Institute of Marine Biology, research that covers a number of areas.

“From marine mammal research and how they hear, to sharks and how they move around our islands, to understanding how the corals themselves function in warmer and more acidic waters that are related to changes in the environment with climate change,” said Gates.