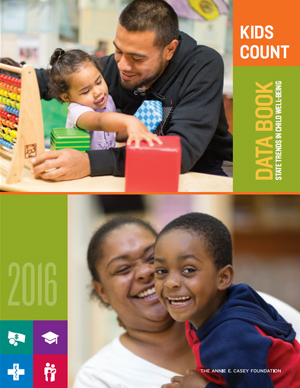 The 2016 KIDS COUNT Data Book continues to look at child well-being in the midst of the country’s economic recovery, after the recession ended in June 2009. The data book focuses on trends over the last six years (roughly 2008 to 2014). It also examines the influence of parents’ education, health and other life circumstances on child well-being.

“The most troubling news from this year’s report is that Hawaiʻi continues to see increases in the share of children growing up in poverty and harsh economic conditions,” said Ivette Rodriguez Stern, Hawaiʻi KIDS COUNT project director at the University of Hawaiʻi at Mānoa’s Center on the Family, a unit within the College of Tropical Agriculture and Human Resources. “One bright note is that, despite economic challenges, Hawaiʻi teens are making progress.”

The teen birth rate decreased during the period examined, down 41 percent since 2008. The proportion of high school students graduating on time has increased slightly, up to 78 percent in 2012 to 2013 (the most current year for which data are available) from 76 percent in 2007 to 2008.

However, despite the economic recovery and rising employment, an increasing number of Hawaiʻi’s children are growing up in economic hardship. “While we are below the national average, the percent of children in our state living in poverty increased by 50 percent between 2008 and 2014, compared to the 22 percent increase seen across the nation during that time,” explains Stern. “Our child poverty rate now stands at 15 percent, which is also slightly higher than the 13 percent reported last year.”

In addition, increases in the number of children whose parents lack secure employment and the number of children who live in high-poverty neighborhoods have persisted. And while the share of children living in households with a high housing cost burden (i.e., where more than 30 percent of the household income is spent on housing) has improved slightly (decreasing from 47 percent in 2008 to 41 percent in 2014), Hawaiʻi has among the worst housing cost burden rates in the nation, ranking 45th out of 50 states on this indicator.

“These data understate the proportion of children growing up in economic hardship,” said Stern. “Research shows that families need income at least twice the poverty level, probably more in Hawaiʻi given our high cost of living, just to cover basic living expenses like food, housing, transportation and childcare. According to Census data, about one-third of our children are now growing up in those low-income families that are facing the challenges of just getting by, up from a little over a quarter in 2008.”

Decades of research show how growing up in financial hardship can have profound effects on children, especially when the hardship occurs early in life, impacting their cognitive, social, emotional and physical development. If these issues go unaddressed or a child continues to experience economic hardship, chances increase for difficulties later in life, such as dropping out of school, teenage pregnancy and poor employment outcomes.

The encouraging news is that the Data Book outlines policy recommendations that are consistent with efforts gaining momentum in Hawaiʻi to increase opportunity and reduce poverty and inequality.

“To ensure good outcomes for this generation of young children, we must continue to expand access to high quality preschool and early childhood services for keiki age birth through four,” said Barbara DeBaryshe, a specialist at the Center on the Family and an expert in early childhood education. “We currently have 19 state Pre-K classrooms located in DOE (Department of Education) schools throughout the islands. The state Legislature also recently increased funding for the Preschool Open Doors Program so that more low-income children can attend early learning programs. However, with nearly half of our three- and four-year-olds still not participating in early learning programs, we must continue to do more so that all of Hawaiʻi’s children have a fair chance to develop their potential as they grow.”

The report also provides a recommendation to ensure family economic security in the face of a health crisis or when a major family event occurs, like the birth of a child. Paid family leave is recommended as a way to help low-income families and low-wage earners balance their obligations at home and in the workplace. Legislation was proposed this past session for a paid family leave program in Hawaiʻi. While the measure did not pass, progress was made with the passage of a Senate resolution that establishes a task force to examine the benefits and costs of such a program in Hawaiʻi. “While all employees in Hawaiʻi will be positively impacted by a paid family leave program, such a policy is especially critical for low-income families that have few resources and support when a family member is ill or a baby is born,” said Stern.

The Data Book ranks each state on overall child well-being. Hawaiʻi sits in the middle range for national child well-being, ranking 23 out of 50 states. Findings in the four domains measured include the following:

The 2016 KIDS COUNT Data Book may be viewed in its entirety at www.aecf.org.