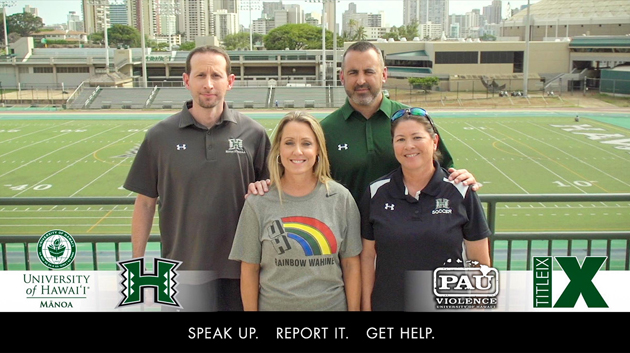 The overarching message of the PSA is that violence of any kind is not acceptable and that everyone needs to work together to create a safe community.

UH Mānoa athletics views the issue of domestic and campus violence as a top priority. At the recent “Ladies Night” event with the UH football team, a representative from the Domestic Violence Action Center of Hawaiʻi spoke to participants about the importance of this issue.

“Domestic violence has no part on our football team and will not be condoned,” said Rolovich. “Our team understands this and we hope it sticks with them for the rest of their lives. Our responsibility as representatives of this university and the state is to be good citizens and we, as coaches, preach to them the importance of living aloha each and every day.”

Added UH Mānoa Athletics Director David Matlin, “All of our student-athletes participated in mandatory sexual violence prevention training. This is an important community issue, so we will continue to educate our students about the prevention of violence within our university ʻohana and the broader community.”

According to national statistics, 1 in 3 women and 1 in 4 men have been victims of some form of physical violence by an intimate partner within their lifetimes. “Violence affects everyone and I hope that bringing awareness to these facts will help people take action. Let’s continue to take care of one another in the spirit of aloha,” said Beeman.

The PSA will begin airing on August 15, 2016, and will also be shown in UH venues such as the Stan Sheriff Center, Les Murakami Stadium, Wahine Softball Stadium and Aloha Stadium. The PSA will also be used for Title IX educational programs at the university and in the community. Additionally, the PSA will run on local radio stations.