Serving as a catalyst for thought-provoking discussions, University of Hawaiʻi at Mānoa Professors Katherine Irwin and Karen Umemoto’s new book offers a critical analysis of Hawaiʻi’s urban and rural youth who face poverty, racism, sexism and political neglect in the context of 200 years of American colonial control in the Pacific. Titled Jacked Up and Unjust: Pacific Islander Teens Confront Violent Legacies, the book reflects upon the past of American imperialism in the Pacific and the ways that these teens and their families are confronted with and deal with these enduring injustices. 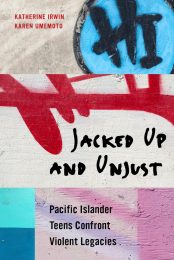 Jacked Up and Unjust is based on nine years of ethnographic research conducted in two Oʻahu public high schools. Over the course of the study, more than 95 teens and over 60 adults were observed and interviewed. Adults included parents, community leaders and high school and juvenile justice system employees. The narratives collected portray a vivid image of how these girls and boys struggle daily to forge their own identities, and fight for dignity and the chance to thrive in complicated conditions.

“There’s a strong tendency to demonize youth who engage in violent behavior without looking more deeply into their personal histories as well as the broad circumstances of their actions. There’s too little understanding of the connections between the legacies of colonialism and contemporary youth violence,” said co-author Umemoto, a professor and chair of the urban and regional planning department in the College of Social Sciences. “This book tries to make those connections clearer and give voice to youth who confront violence and its entanglements. We hope that this book will give us pause to rethink our juvenile justice and school discipline policies and work harder to help our youth get to the root of the problems they’re confronting.”

“Although the story begins with the difficult odds faced by Hawaiʻi’s teens, it ends on a hopeful note. There are multiple ways that these teens negotiated the slippery terrain of adolescence. Many, although not all, of the youths’ paths ended in triumph and pride for the youth and their families,” added lead author Irwin, a professor from the Department of Sociology in the College of Social Sciences. “The love, compassion, and extraordinary patience of the adults in the communities and schools provided the necessary support to guide these teens to high school completion and toward the happy adulthoods that the youth imagined for themselves. In an era of mass incarceration, tough-on-crime policies, and intensive policing in distressed neighborhoods, the non-punitive and compassionate approach to youth violence outlined in this book is instructive for students, policymakers, practitioners, or anyone who is interested in making a difference in young people’s lives.”

During the course of their research, Irwin and Umemoto made a series of key findings.

Revealed in Jacked Up and Unjust

Irwin has conducted research in the areas of youth culture, women and drug use, youth violence, girls in the juvenile justice system, deviance and delinquency prevention programming. She is the co-author, with Meda Chesney-Lind, of Beyond Bad Girls: Gender, Violence and Hype. Her ethnographic work has been published in a number of journals such as Youth Violence and Juvenile Justice, Critical Criminology, Feminist Criminology, Race and Justice and Qualitative Sociology.

Umemoto’s research focuses on issues of planning and governance in a multicultural society and community and youth development. She served as the director of training for the Asian and Pacific Islander Youth Violence Prevention Center in the John A. Burns School of Medicine. Her book, The Truce: Lessons from an LA Gang War, examined government and community responses to gang violence in Los Angeles. She also works with various public and non-profit organizations on strategic planning and community development.