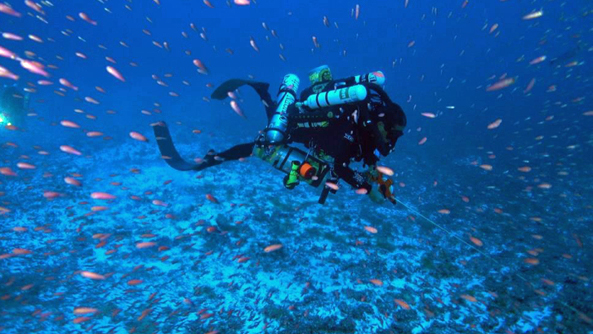 A team of 16 researchers, including several from the University of Hawaiʻi at Mānoa, has completed a comprehensive investigation of deep coral reef environments, known as mesophotic coral ecosystems, throughout the Hawaiian Archipelago. The study, published in the open-access journal PeerJ, spanned more than two decades and involved a combination of submersibles operated by the UH Mānoa Hawaiʻi Undersea Research Laboratory (HURL), remotely operated vehicles, drop-cameras, data recorders and advanced mixed-gas diving to study these difficult-to-reach environments.

The researchers documented vast areas of 100 percent coral-cover and extensive algal communities at depths of 50-90 meters (165-300 feet) extending for tens of square kilometers, and found that the deep-reef habitats are home to many unique and distinct species not found on shallow reefs. The findings of the study have important implications for the protection and management of coral reefs in Hawaiʻi and elsewhere.

“This is one of the largest and most comprehensive studies of its kind,” said Richard Pyle, Bishop Museum researcher and lead author of the publication. “It involved scientists in many different disciplines and from multiple federal, state and private organizations working together with a range of different technologies across the entire Hawaiian Archipelago.”

The primary objective of the study was to characterize deep coral reef habitat, known as mesophotic coral ecosystems or the coral-reef “Twilight Zone.” Coral reefs at depths of 30 to 150 meters (100 to 500 feet) are among the most poorly explored of all marine ecosystems on Earth. Deeper than conventional scuba divers can safely venture, and shallower than most submersible-based exploration, these reefs represent a new frontier for coral reef research.

To document these elusive deep coral reefs, the team used a wide range of advanced technology, including multibeam bathymetry mapping, mixed-gas closed-circuit rebreather diving, towed and remotely operated camera systems, a variety of environmental sensors for recording light, temperature, water movement and other parameters, and two research submersibles operated by HURL. One of the novel approaches taken during the project was to combine rebreather divers and submersibles together on coordinated dives.

“Free-swimming divers and submersibles don’t often work side-by-side on scientific research projects,” said Pyle. “Submersibles can go much deeper and stay much longer, but divers can perform more complex tasks to conduct experiments and collect specimens. Combining both together on the same dives allowed us to achieve tasks that could not have been performed by either technology alone.”

A major focus of the study was to document extensive areas of 100 percent coral cover at depths of 90 meters (300 feet) or more off the islands of Maui and Kauaʻi. In particular, vast expanses of continuous coral cover, extending for tens of square kilometers, exist in many sites in the ʻAuʻau channel off the southwest side of Maui. The reefs are dominated by stony, reef-building corals in the genus Leptoseris, a plate-like coral specialized for deep reef environments.

“These are some of the most extensive and densely populated coral reefs in Hawaiʻi,” said Anthony Montgomery, a co-author of the study who represented the Hawaiʻi State Department of Land and Natural Resources during most of the project. “It’s amazing to find such rich coral communities down so deep.”

In addition to the corals, the area is also home to extensive algae meadows that support unique communities of fishes and invertebrates. More than seventy species of macroalgae inhabiting the deep reefs were identified during the study, and several more new species have not yet been assigned formal scientific names. Both corals and algae depend on sunlight to drive photosynthesis, and the study attributed the existence of many of the deep reef habitats to exceptionally clear water.

“We found that the diversity of macroalgal species actually peaked at around 90 meters (300 feet) deep,” said Heather Spalding of the UH Mānoa Department of Botany and a co-author of the study. “These extensive algae meadows represent a major component of the deep-reef communities, and play a fundamentally important role in the overall ecology.”

Species found nowhere else on Earth

Another interesting finding of the study is that the rate of endemism—species found nowhere else on Earth—increases substantially on the deep reefs. Whereas only 17 percent of the fishes surveyed at depths less than 30 meters (100 feet) are species endemic to the Hawaiian Islands, more than half of the species below 70 meters (230 feet) are Hawaiian endemics. The rate of endemism increases even more in the Northwestern Hawaiian Islands, where 100 percent of the fishes inhabiting some of the deep reefs are found only in Hawaiʻi.

“The extent of fish endemism on these deep coral reefs, particularly in the Northwestern Hawaiian Islands, is astonishing,” said Randall Kosaki, NOAA’s Deputy Superintendent of the Papahānaumokuākea Marine National Monument and a co-author of the study. “We were able to document the highest rates of endemism of any marine environment on Earth.”

The food web supporting the fishes on deep reefs was studied using advanced stable isotope methods, which revealed small but important differences in the ecology of fish living on deep and shallow reefs.

“We used these methods because more traditional approaches require large numbers of specimens,” said Brian N. Popp, professor of Geology and Geophysics in the UH Mānoa School of Ocean and Earth Science and Technology. “Our results are helping us better understand the relationship between the ecology of deep and shallow coral reef fish communities.”

The results of the study have important implications for conservation management. In addition to the rich and unique biodiversity inhabiting these environments, deep coral reefs may serve as a refuge for certain species that are more heavily impacted on shallow coral reefs.

“With coral reefs facing a myriad of threats,” said Kimberly Puglise, an oceanographer with NOAA’s National Centers for Coastal Ocean Science. “The finding of extensive reefs off Maui provides managers with a unique opportunity to ensure that future activities in the region, such as cable laying, dredging dump sites, and deep sewer outfalls, do not irreparably damage these reefs.”

The research, which spanned more than two decades and encompassed the entire 2,590- kilometer (1,600-mile) extend of the Hawaiian Archipelago, was primarily supported by NOAA’s National Centers for Coastal Ocean Science, Papahānaumokuākea Marine National Monument, Coral Reef Conservation Program, Office of Ocean Exploration and Research, and the Pacific Islands Fisheries Science Center, as well as, HURL and the State of Hawaiʻi.

“We dedicate this work to our friend, colleague and co-author John Rooney, whose commitment to documenting mesophotic coral ecosystems in Hawaiʻi was inspirational to us all,” stated the authors. Rooney received a master of science degree in oceanography in 1995 and his doctorate in geology and geophysics in 2002, both from the UH Mānoa School of Ocean and Earth Science and Technology. Rooney passed away in a recreational diving accident in Hawaiʻi on January 16, 2016.