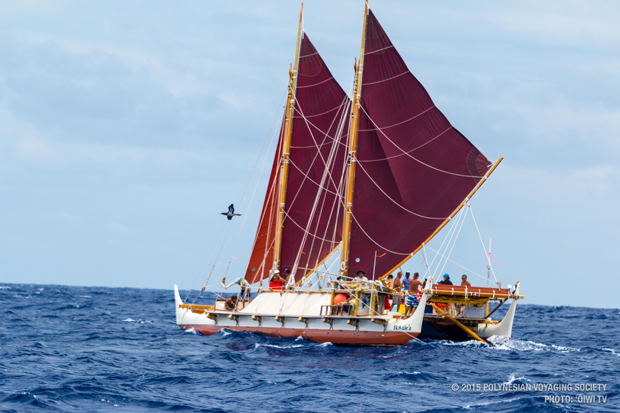 Voting is open to support members of the University of Hawaiʻi ʻohana as National Geographic’s 2017 Adventurers of the Year. The recognition is for extraordinary achievements in exploration, adventure sports, conservation or humanitarianism.

Among this year’s nominees is The Hōkūleʻa Team, comprised of celestial circumnavigators such as the Polynesian Voyaging Society’s Nainoa Thompson, a former University of Hawaiʻi regent, and UH Hilo’s Imiloa Astronomy Center Navigator-in-Residence Chad Kalepa Baybayan. The team is currently on a four-year journey across large swaths of oceans in the famed Hōkūleʻa voyaging canoe guided only by the stars and the belief that Polynesian culture should not be lost to the wake of modernization. In the process, they ignited a cultural restoration in Hawaiʻi and taught a new generation of adventurers how to navigate by the stars. Thompson was also a 2016 recipient of the National Geographic Society’s most prestigious award, the Hubbard medal.

The Mālama Honua Worldwide Voyage began in 2013 and will continue through 2017 when a new generation of navigators take the helm and guide the voyaging canoes Hōkūleʻa and Hikianalia back to Polynesia after circumnavigating the globe.

Besides The Hōkūleʻa Team, this year’s nominees include a cave diver who discovered the world’s deepest underwater cave, a pair of journalists who embarked on a full-length hike through the Grand Canyon, a kayaker who completed the first solo descent of the 5,464-kilometer Yellow River in China and a teenage rock climber who became the first female (and youngest person) to complete some of the hardest-rated boulder routes on Earth.

“This is the 12th year that National Geographic has searched around the world for individuals who personify the adventurous spirit in unique ways,” said Mary Anne Potts, National Geographic Adventure editorial director. “This year’s honorees are extraordinary and inspiring people who push the boundaries of exploration.”

More on the 2017 People’s Choice Adventurer of the Year is also available at @NatGeoAdventure on Instagram or @NGAdventure on Twitter using #advofyear.