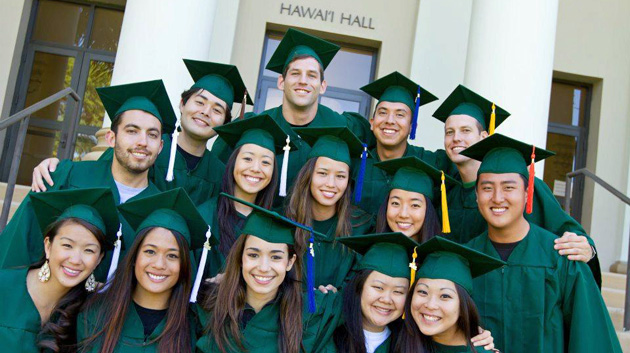 The University of Hawaiʻi was honored today for two of its graduation initiatives that are national models. Before an audience of 600 higher education leaders and advocates from around the country, Complete College America announced that UH is the inaugural recipient of two President’s Awards at the national nonprofit’s 2016 annual meeting in San Francisco, California.

Complete College America is dedicated to increasing the number of Americans with college degrees and established the President’s Award to recognize innovation and outstanding contributions to national college completion efforts, especially as it relates to the organization’s five Game Changer strategies. The honors come as the university increased its four-year graduation rate at its flagship campus, UH Mānoa, by 83 percent, from 17.5 percent in 2010 to an all-time high of 32.1 percent in 2016.

“The University of Hawaiʻi System understands that for far too many students, college takes too long, costs too much and graduates too few,” said Stan Jones, president of Complete College America. “UH President David Lassner and his team have charged forward to address these challenges head on, choosing to lead, not to follow.”

The university was recognized by Complete College America for its STAR program—technology developed at UH that provides students a clear pathway to graduation by allowing them to track their progress, review requirements, and explore the impact of scheduling (and changes in major) on the time it will take them to graduate.

“This honor really recognizes the work of many people across UH for more than 15 years,” said Lassner. “It has taken persistent vision and focus by administrators, IT specialists, advisors, faculty and students to put us in this national leadership position. Every day we are advancing our homegrown Graduation Pathway System, STAR, in new ways to help more UH students across our statewide system complete college in a timely manner, also saving money for them and their families.”

The university received a second President’s Award for the 15 to Finish campaign that encourages students to take 15 credits per semester to ensure on-time graduation. The campaign was conceived and launched at UH and has since been implemented by seven states and 120 institutions nationwide. An additional seven states have committed to launching campaigns in 2017.

“Complete College America has recognized 15 to Finish as one of their five game changers,” said Lassner. “Another one of their game changes is our STAR initiatives, and once again, we are being recognized as a national model. Pretty good for one university in a small state.”

“The 15 to Finish and STAR initiatives are a powerful combination, providing students not only with the information, but also the structure necessary to graduate on time,” said Jones. “We are grateful for the leadership Hawaiʻi has shown and look forward to the work we will continue to do together.”

Jones says the Complete College America President’s Award honors “those who demonstrate uncommon leadership and courage—the innovators who have been unwilling to tolerate the shortcomings of the current higher education system and instead endeavor every day to ensure many more students are able to graduate.”