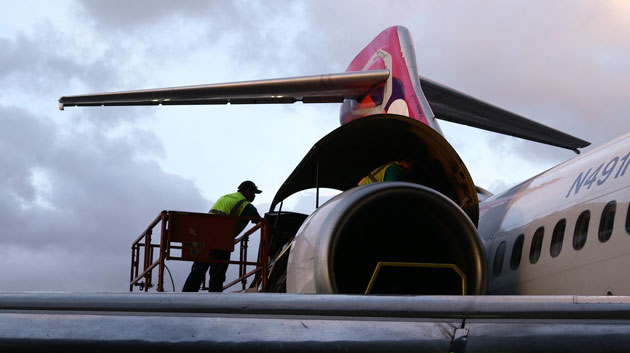 Honolulu Community College students like Scott Yago are now getting valuable on-the-job training through a new aircraft mechanic apprenticeship program in partnership with Hawaiian Airlines and the International Association of Machinists and Aerospace Workers.

“This apprenticeship actually puts all the pieces together that you learn at HCC,” Yago said.

The hands-on program for up to eight candidates was designed to meet the growing needs of the state’s tourism industry and Hawaiian Airlines, one of the state’s largest employers, with more than 6,000 employees and over 250 aircraft mechanics.

Hawaiian Airlines Vice President Jim Landers said, “We see this as an important opportunity to keep local students fully engaged in an industry that’s very important to the Hawaiʻi community.”

Honolulu Community College is home to the only fully certified aircraft maintenace degree training program in the Pacific Basin. From spring 2011 to spring 2016, the college awarded 95 Federal Aviation Administration certificates. Starting salaries after graduation from the two-year program run about $55,000.

Keala Chock, Honolulu Community College’s dean for transportation and trades, said the college’s program is a transformative opportunity. “Spending two years here, getting really critical training that they need to become technicians in our airline industry—you can’t find those type of opportunities elsewhere.”

There’s also a huge reward built into the new apprenticeship program. Students who earn their airframes and powerplant license and demonstrate strong performance are guaranteed positions with Hawaiian Airlines as full-time aircraft mechanics upon graduation.

“The sky is the limit with this,” said Yago. “But my end goal actually is I want to become either a lead or a chief, someone that has a lot of responsibility.”