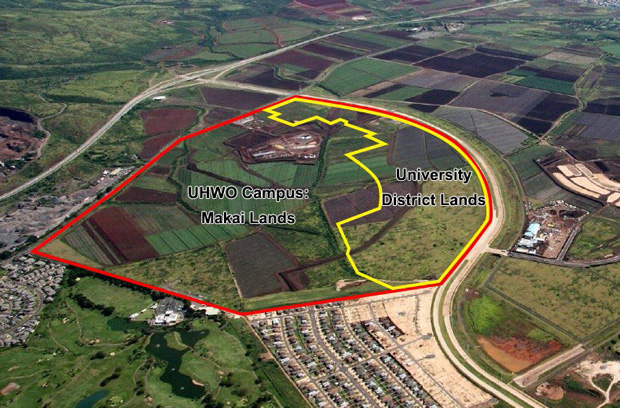 The University of Hawaiʻi is recommending Hunt Companies Inc. and Stanford Carr Development as the UH West Oʻahu University Village project developers. UH President David Lassner made the announcement at the January 26, 2017 Board of Regents meeting.

“While this is the critical first step and recognizes the desire on the part of UH to pursue the build out of a University Village and other mixed-use developments, there are still many details to be worked out,” said Lassner. “The exclusive negotiations phase of this process can take anywhere between 12 to18 months because it solidifies the scope and timing of development phases, as well as financial commitments.”

This is the first step in the request for business plan solicitation process, and the next step involves direct negotiations to refine a development and financing program, which will also require Board of Regents approval.

The site known as the University District, which runs east of the UH West Oʻahu campus lands bordering Kualakaʻi Parkway, is intended to be a mixed-use community that will complement the adjoining campus. The revenue generated by the private development of this land is intended for investment into campus facilities to advance the growth of UH West Oʻahu and its academic programs.

“While there remains much work to be done, we are excited about this milestone and look forward to building on its momentum—in concert with all other community stakeholders,” said Lassner.

The majority of the acreage is zoned for a broad range of uses. Possibilities for the University District may include leasehold housing options; retail and commercial activities and other uses that would complement the UH West Oʻahu campus and also serve the region. There will be transit-oriented development options near the transit stations. Two stations will be located directly across Oʻahu Kualakaʻi Parkway from UH West Oʻahu.