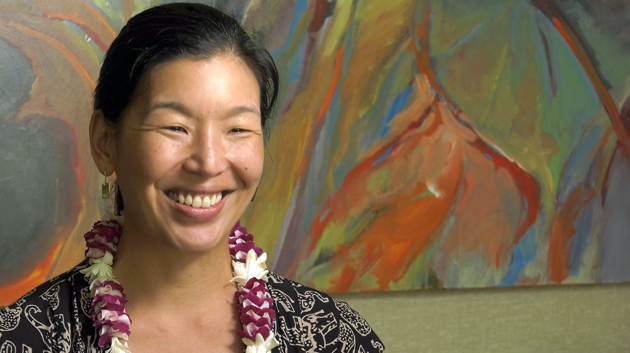 Ai-jen Poo, who helped lead the way to the passage of the nation’s first Domestic Workers Bill of Rights, has been named the University of Hawaiʻi at Mānoa spring 2017 Dan and Maggie Inouye Distinguished Chair in Democratic Ideals.

Poo, an award-winning social innovator, thought leader and author, is the co-director of Caring Across Generations and director of the National Domestic Workers Alliance, one of the partner organizations of the Women’s March on Washington. Poo’s early organizing led the way to the passage of the nation’s first Domestic Workers Bill of Rights, the 2010 historic legislation that extends basic labor protections to more than 200,000 domestic workers in New York state. In 2011, Poo co-created the national Caring Across Generations campaign to ensure access to affordable care for the nation’s aging population and access to quality jobs for the caregiving workforce.

While in Hawaiʻi, Poo will advocate for the passage of long-term care legislation in the Hawaiʻi legislature to ensure increased access to affordable in-home care services and improved wages and working conditions for care workers in the state. As part of her month-long term as the Inouye Distinguished Chair, Poo will be guest teaching an undergraduate course and a graduate course on social movements with UH Mānoa American Studies Professor Robert Perkinson. On March 22, she will present the public keynote address, “Organizing with Love in the Age of Anger” at the UH Mānoa Art Auditorium.

“Ai-jen Poo served as our mid-year commencement ceremony speaker this past December, and she presented an intellectually honest and inspirational case for how we must collectively move forward in these difficult and challenging times,” said UH President and Interim UH Mānoa Chancellor David Lassner. “She has long advocated for the rights of the ignored and marginalized. We are thrilled that she will be with us, and that students, faculty and the public will have ample opportunity to engage with her.”

Ken Inouye, the son of Dan and Maggie Inouye says his mother would especially be pleased with the Poo’s selection.

“She is an Asian American woman whose lifelong focus has been to advocate for those whose jobs are to care for others,” said Inouye. “At a time when the rights of so many are precarious at best, she offers us a constructive approach toward the future.”

Poo’s numerous accolades include recognition as one of the Fortune.com World’s 50 Greatest Leaders in 2015, a 2014 MacArthur Foundation “genius” fellow, a 2013 World Economic Forum Young Global Leader, and one of TIME magazine’s 100 Most Influential People in the World in 2012. She serves on the Board of Directors of Momsrising, National Jobs with Justice and Working America. Her book The Age of Dignity: Preparing for the Elder Boom in a Changing America, was reviewed by the New York Times.

Established in 2005 by the UH Board of Regents, the Dan and Maggie Inouye Distinguished Chair in Democratic Ideals brings significant public figures to Hawaiʻi to foster public discourse regarding democratic ideals and civic engagement. The chair is housed in the UH Mānoa Department of American Studies in the College of Arts and Humanities and the William S. Richardson School of Law.