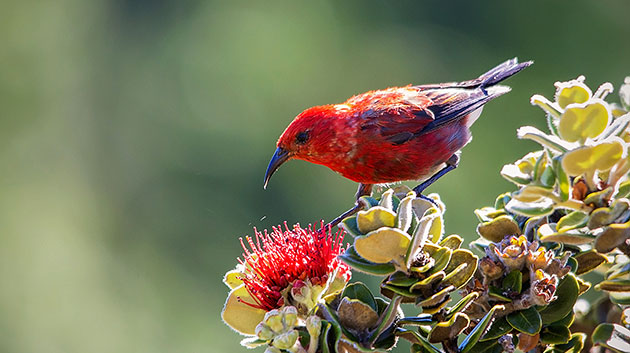 To protect Hawaiʻi’s unique, imperiled native birds, researchers from the University of Hawaiʻi at Mānoa and UH Hilo are teaming up with the Department of Land and Natural Resources (DLNR) and the U.S. Fish and Wildlife Service to adapt a ‘birth control’ method used across the U.S. mainland to control mosquitoes. The scientists are taking the first steps to adapt a safe, targeted and efficient mosquito control method known as Incompatible Insect Technique to reduce the population of the disease-carrying mosquitoes that harm native birds in Hawaiʻi.

Incompatible Insect Technique acts like a birth control method for mosquitoes and it has already been adopted and proven successful around the country and the world to protect human health and quality of life. A similar method has been used in Hawaiʻi for decades to control fruit fly pests which are harmful to local agricultural products.

Mosquitos are a nuisance and a hazard both to people and to Hawaiʻi’s native birds, which are in danger of extinction from decades of habitat loss, predation and diseases like avian malaria and avian pox.

“We are already seeing the loss on Kauaʻi of the safe havens of higher elevation forests for our native birds. Mosquito-spread diseases are decimating bird populations and if we do nothing we could lose several more species in the next 10 years,” said Cynthia King, an entomologist with DLNR.

Just one of the 6 types of mosquitoes found in Hawaiʻi harms native birds—Culex quinquefasciatus. Scientists and conservationists are working together to use a bacteria that is naturally-occuring in fruit flies in Hawaiʻi. It is called Wolbachia, and the research, which will be done in controlled laboratory settings, involves giving the male mosquitoes a different strain of Wolbachia than is normally found in them, to prevent them from producing offspring. To reproduce, most mosquitoes carry a type of this Wolbachia in their system. When male mosquitoes with the different strain of Wolbachia try to mate with females, there are no offspring.

“The process for mosquitoes is very similar to techniques that have been used for many decades in Hawaiʻi to control pest fruit flies for the benefit of agriculture,” said King. “It doesn’t eradicate the insect, but helps to safely reduce the population on a landscape scale without the use of pesticides and without harming any other species.”

Read more about the efforts to reduce the mosquito population.

—A Department of Land and Natural Resources news release