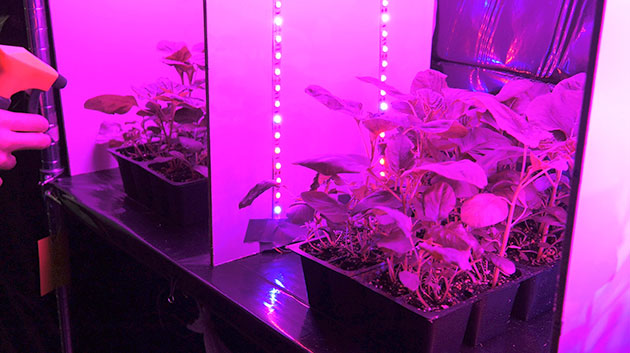 Research at the University of Hawaiʻi at Mānoa could play a major role in NASA’s goal to travel to Mars in the 2030s, including what the astronauts could eat during that historic mission.

A trip to Mars and back is estimated to take about two and half years, and ideally, their diet would be healthy while requiring minimal effort and energy. UH Mānoa mechanical engineering student Aleca Borsuk may have the solution.

“I picked a really hearty, heat tolerant, drought tolerant species of edible vegetable, and that is amaranth. It’s an ancient grain,” said Borsuk, who determined that she could significantly increase the edible parts, which is basically the entire plant, by changing the lighting. “If you move the lights and have some of them overhead and some of them within the plant leaves, it can actually stimulate them to grow faster and larger.”

This is without adding more lights and by using energy efficient LEDs. Thanks to Borsuk’s work with lighting, plants could play an important role in the future of space travel.

“This plant would do the same thing that it does here on Earth, which is regenerate oxygen in the atmosphere,” said Borsuk. “It also can provide nutrition for the astronauts and if you can imagine being away from Earth for many years, you know tending something that’s green would have a psychological boost as well.”

A 2013 UH Presidential Scholar, Borsuk presented her research at the Hawaiʻi Space Grant Consortium Spring 2016 Fellowship and Traineeship Symposium and at the 2016 American Society for Horticultural Science Conference in Florida. She is mentored by UH Mānoa Tropical Plant and Soil Sciences Associate Professor Kent Kobayashi, who is also an American Society for Horticultural Science Fellow.

UH is not only researching what astronauts could eat during a trip to Mars, researchers are also studying crew cohesion.

Since 2013, UH Mānoa’s Hawaiʻi Space Exploration Analog and Simulation, or HI-SEAS, has been researching how teams of astronauts will perform together on long-duration space exploration missions. Crew members in the NASA funded project have spent up to a year isolated in a dome located in a remote, Mars-like area of Hawaiʻi Island.