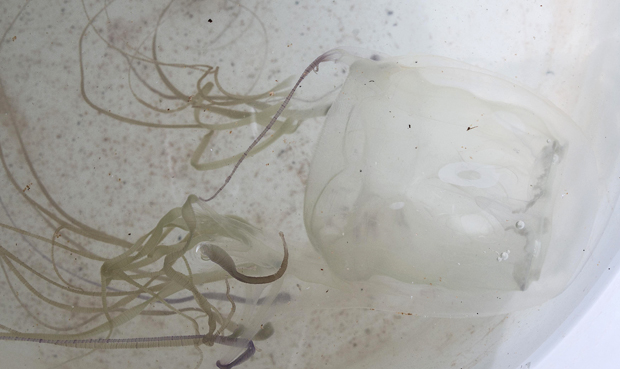 Being stung by a jellyfish is one of the fastest ways to ruin a fun day at the beach. But what you do after you’re stung has the potential to make you feel much better or make matters a lot worse. Researchers at the University of Hawaiʻi at Mānoa investigated whether commonly recommended first aid actions such as rinsing with seawater or scraping away tentacles lessen the severity of stings from two dangerous box jellyfish species. Their results, published this week in the journal Toxins, reveal that some of the most commonly recommended practices actually worsen stings.

“Anyone who Googles ‘how to treat a jellyfish sting’ will encounter authoritative web articles claiming the best thing to do is rinse the area with seawater, scrape away any remaining tentacles, and then treat the sting with ice,” said Angel Yanagihara, lead author of the paper and assistant research professor at the UH Mānoa Pacific Biosciences Research Center and John A. Burns School of Medicine (JABSOM). “We put those methods to the test in the lab and found they actually make stings much, much worse.”

Box jellies are among the deadliest animals in the oceans responsible for more deaths every year than sharks. Even mild stings cause severe pain and can leave horrible scars.

Yanagihara, aided by Christie Wilcox, a postdoctoral fellow at JABSOM, looked at the best ways to respond to stings from two dangerous box jelly species, the Hawaiian box jelly Alatina alata here in Hawaiʻi and the largest box jelly in the world, the Australian box jelly Chironex fleckeri. In order to conduct the study, Yanagihara, traveled to Cape York Australia in December 2016 to work on-site with live Chironex. For both, they examined how different ways of removing tentacles—rinsing with vinegar or seawater, scraping with a credit card or simply plucking them off—affected the amount of venom injected during a sting using a human tissue model designed by Yanagihara. They also looked at whether treating with ice packs or hot packs reduced the damage done by the venom.

The most and least effective treatments

The team found that some of the most commonly recommended actions, including rinsing with seawater, scraping the tentacles and applying ice, dramatically increased the severity of the stings. “Less than one percent of stinging cells on a tentacle actually fire when you’re first stung,” explained Wilcox. “So anything you do that moves the tentacles or adherent stinging cell capsules around has the potential to increase the amount of venom injected into you by many fold.”

Instead of rinsing with seawater or scraping, the team found that rinsing with vinegar—which irreversibly prevents the stinging cells from firing—or even simply plucking tentacles off with tweezers led to less venom injection. And after the sting, applying heat actively decreased venom activity. Applying ice not only didn’t help, for stings from the Hawaiian box jelly, it actually enhanced the venom’s activity to make stings cause more than twice the damage. And, if you have it available, the team found the best way to treat a jelly sting was the combination of Sting No More™ Spray and Cream, a venom-inhibiting product duo developed by Yanagihara with Hawaiʻi Community Foundation, National Institutes of Health and Department of Defense funding.

“Box jellies are incredibly dangerous animals. The more venom they inject, the more likely a victim is to suffer severe, even life threatening symptoms,” said Yanagihara. “The increases in venom injection and activity we saw in our study from methods like scraping and applying ice could mean the difference between life and death in a serious box jelly sting.”

“It’s all too easy to find bad advice on treating jelly stings on the internet,” said Wilcox. But she also noted that such bad advice isn’t solely the fault of the sites that provide it. “Even in the peer-reviewed literature, there are a lot of examples of recommendations that are made in passing in discussion sections without any direct evidence to back them up, and then those just keep getting repeated and cited over and over even though they’re not based on rigorous, empirical scientific evidence.”

The team expects these statistically powered findings will prompt online medical sites, government agencies, and the broader medical community to re-evaluate the advice they provide on treating jelly stings. International collaborators and colleagues have joined in this effort and are conducting similar studies around the world using this Yanagihara-Wilcox sting model to test locally prevalent jellyfish species in a similar push to develop evidence-based medical practices.

Sting No More™ (Alatalab Solutions, LLC) was developed under a Department of Defense grant that aimed to rapidly and effectively treat stings in U.S. Special Operations Command combat divers. With the intention of supporting the development of technologies and therapies of benefit to people, the funding required a commercialization plan for resulting products. All testing of the new commercial product, in the current study was performed under an approved University of Hawaiʻi Conflict of Interest plan. This product demonstrates the strongly pro-innovation culture at UH dedicated to bringing to the public sector technologies that have been developed with federal and state research dollars.