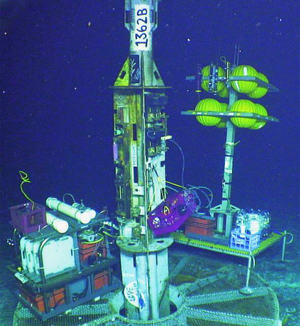 A team of scientists from the University of Hawaiʻi at Mānoa School of Ocean and Earth Science and Technology showed for the first time that many novel viruses are present in the fluids circulating deep in the rocky crust of the seafloor known as the ocean basement. Their recently published study also provides evidence that the viruses are actively infecting the many unusual microorganisms that live in the basement.

Viruses are often thought of as a nuisance because of the familiar diseases they cause—common colds and the flu, for example. However, viruses infect every living thing on earth and viral infections have been one of the major creative forces that shape the nature of life on our planet. The first viruses likely originated at the dawn of life billions of years ago. Through relentless cycles of infections, viruses have helped drive the evolution of the diverse life found on our planet and their influence continues to this day.

“The ocean basement was one of the last major habitats on Earth for which we had no information on the number and types of viruses present,” said lead author Olivia Nigro, a post-doctoral researcher of oceanography. “The volume of water that moves under the seafloor through the ocean basement is enormous. Annually, it is equivalent to the flow of all the rivers on the planet combined.”

Hydrothermal vents and plumes, like those found in Hawaiʻi at Lōʻihi seamount, are the most spectacular evidence of that flow.

“Despite the massive scale of flow through the seafloor and its importance for understanding the chemical balance of our oceans, our view of the unusual microorganisms that live in this fluid and how they interact is still very sketchy,” said Grieg Steward, oceanography professor and lead investigator for the project.

It is very challenging to get a clean sample of water from rocks buried under hundreds of feet of sediment at the bottom of the Pacific Ocean. To do this, the team took advantage of devices designed to plug holes drilled deep into the seafloor called Circulation Obviation Retrofit Kits, or CORKs. The bottom of the CORKs seal off the fluids in the basement and transport samples of that fluid to a sampling port that extends a few meters above the seafloor. The CORKs sampled were over one-and-half miles under the ocean and required an autonomous underwater vehicle to connect the sample vessels, open and close the valves, and return the samples to the surface.

The researchers used microscope and DNA analyses to count and characterize the viruses in the fluids and to detect viral DNA inside of cells. This pioneering work provided the first look at the diverse and unusual viruses infecting the microorganisms in warm basaltic crust, which forms the very foundation of the Hawaiian Islands. Surprisingly, many of them resemble the lemon- and rod-shaped viruses found in hot springs on land, like those in Yellowstone National Park, even though these two habitats are very far apart.

Looking deep, deep into the past

“One of the likely places for the origin of the first living cells and viruses was in hydrothermally active seafloor,” said Nigro. “Analyzing viruses from this remote habitat helps us flesh out the deep branches on the virus family tree so we can better understand their origins, their contributions to the history of life, and how they influence the activities of microbial life in the crust.”

“The data we obtained provides clues about the nature of a microbial world that lies hidden deep in the roots of these volcanic islands,” said Steward. “Through their interactions with rock and water, these deep-dwelling communities of microbes and their viruses are invisible engineers contributing to the chemical balance of our oceans.”

New funding from the National Science Foundation (NSF) will allow the researchers to collect additional samples in the Atlantic Ocean. The conditions in the crust there are very different from those in the Pacific oceanic basement, and the team hopes to determine how these different conditions influence the community of the microbes and their viruses.

This work was inspired by and was made possible in part by the pioneering work of the late James P. Cowen, an esteemed and long-serving faculty member in the Department of Oceanography at UH Mānoa. The researchers dedicated the paper to him in recognition of the encouragement and support that he provided to the team that was instrumental to the success of the project.

The NSF funded this work through two of its Science and Technology Centers, the Center for Dark Energy Biosphere Investigations located at the University of Southern California and the Daniel K. Inouye Center for Microbial Oceanography: Research and Education at UH Mānoa.