Organizers expect more than 1,000 supporters to turn out in support of science and join a march from the University of Hawaiʻi at Mānoa on Earth Day, April 22, 3 p.m. It’s one of several March for Science events being held across the state, and part of activities in all 50 states and more than 50 countries to rally support for science, and you are invited to join. 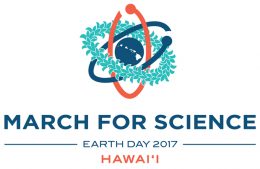 According to the national March for Science website: “Science, scientists and evidence-based policymaking are under attack. Budget cuts, censorship of researchers, disappearing datasets, and threats to dismantle government agencies harm us all, putting our health, food, air, water, climate and jobs at risk.”

The Honolulu March for Science is a non-partisan celebration of the role that science plays in everyone’s lives. Organizers want to bring together science supporters, from keiki and community members to teachers and practitioners.

Says Honolulu March for Science Chair Helen Spafford, “Science research across the state aims to improve the lives of our island community. By working on cures for cancer, tracking hurricanes and sea level rise, leading innovation in robotics, creating sustainable energy sources, stopping the spread of invasive species and trying to save coral reefs, local scientists work hard to make our lives better. We are working to ensure that our leaders in government understand that we value scientific discovery, innovation and development and want public support for science to continue.”

To volunteer with the Honolulu March for Science event, go to https://goo.gl/1U9vy8.

Other March for Science events in Hawaiʻi: