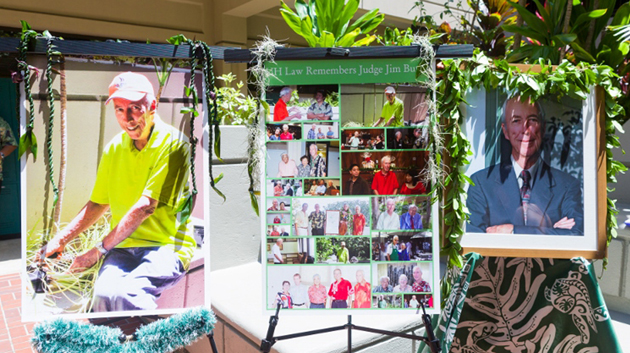 More than 100 friends, colleagues, law students, staff and faculty members gathered in the University of Hawaiʻi at Mānoa William S. Richard School of Law courtyard on April 13 to honor and memorialize Judge James S. Burns, who was remembered as a humorous and “down-to-earth guy,” who treasured his role as a mentor—and gardener—at the law school. He was beloved by students and faculty.

In the shade of the law school’s towering ti garden that Judge Burns planted and tended for a decade, law students planted new young ti plants in his memory, family members spoke warmly of his humor and sage advice—but only if he was asked for it— and School of Law Dean Avi Soifer called him “a man of few words and great common sense.”

Journalist and media personality Emme Tomimbang, the widow of Judge Burns, spoke about how he treasured his time at the William S. Richardson School of Law after his retirement as chief judge of the Intermediate Court of Appeals in 2007, and how it had become like a second home.

His daughter, Meredith Burns, an attorney with the National Labor Relations Board, spoke of how much he loved his work as a judge, as well as his time at the law school. “He put a lot of love into this place,” she said as she recalled how he had often been there on weekends working in the garden. “He wanted Bill Richardson’s school to be lovely.”

The two families had long been close, explained Judge Burns’ son, Brendan Burns, who is the principal at ʻĀina Haina Elementary School. In fact, said Brendan, Judge Burns and CJ Richardson had played league softball together years earlier with “The Musubi Machine.”

“He was a terrific pitcher,” Brendan said of his father, adding, “And the catcher was CJ Richardson.”

Those two leaders had such an impact on the community together, said Brendan, turning to address the students, staff, and faculty at the gathering. “You here are all a result of that legacy. He lives on within each one of us.”

For more on the ceremony, read the full story on the William S. Richardson School of Law website.

in memoriamUH ManoavideoWilliam S. Richardson School of Law
Share This