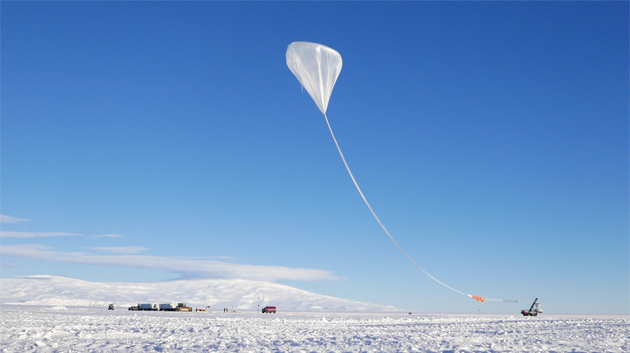 The University of Hawaiʻi at Mānoa is located in a lush paradise, but professor Peter Gorham’s work takes him to the frozen expanse of a faraway continent searching for the elusive neutrino, a tiny particle capable of traveling at light speed, with ANITA.

“ANITA stands for the Antarctic Impulsive Transient Antenna,” said Gorham, professor of physics and astronomy. “It flies over the Antarctic continent as a stratospheric balloon payload and looks for the signatures of high-energy neutrinos that crash into some atom in the ice.”

Neutrinos are fundamental particles of the universe, born in the incredible energy of the Big Bang. They can tell us about everything from the birth of the universe to the nuclear reactions that power our cities. And, Antarctica is a perfect place to study them.

ANITA’s 48 antennas on a 25-foot-tall gondola fly pointed down to capture radio waves in the Antarctic ice, which are signs of high-energy neutrino reactions.

“Antarctica has several properties that make it really ideal for what we want to do, and ice has an amazing property in Antarctica of being almost completely clear to radio waves, that, if you flew over Antarctica with radio eyes, you could see right through the ice several miles deep into it and see the subcontinent below,” said Gorham.

One of the ways UH has supported ANITA research is by building a copper enclosed, foam finger filled laboratory that is “anechoic” (with no radio echoes) to test Gorham’s scientific equipment before sending it to Antarctica.

The ANITA project continues to attract some of the best minds, as well as research dollars, to UH to do cutting edge research at the vanguard of science.

“The University of Hawaiʻi has been incredibly supportive of this effort—the chance to put laboratories like this together and to allow them to be operated. It gives students tremendous opportunities,” said Gorham. “We’re actually the lead institution for ANITA. We’ve developed a great relationship with NASA, brought in something like 10 or 12 million dollars. We’re participating in something which I think is one of the best efforts of humanity.”