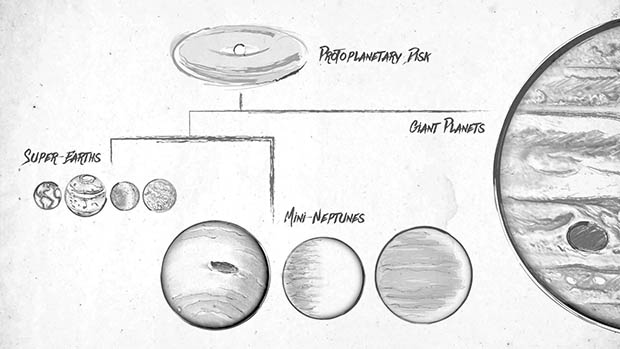 Since the mid-1990s, when the first planet around another sun-like star was discovered, astronomers have been amassing what is now a large collection of exoplanets—nearly 3,500 have been confirmed so far. In a new study, researchers have classified these planets in much the same way that biologists identify new animal species and have learned that the majority of exoplanets found to date fall into two distinct size groups: rocky Earth-like planets and larger mini-Neptunes. The team used data from NASA‘s Kepler mission and the W. M. Keck Observatory on Maunakea.

“This is a major new division in the family tree of planets, analogous to discovering that mammals and lizards are distinct branches on the tree of life,” says Andrew Howard, now a professor of astronomy at the California Institute of Technology, who conducted most of the work while at the University of Hawaiʻi at Mānoa Institute for Astronomy (IfA). The lead author of the new study, to be published in The Astronomical Journal, is UH Mānoa’s Benjamin J. (B. J.) Fulton, a graduate student in Howard’s group who splits his time between IfA and Caltech. This project will be a major portion of his doctoral thesis.

“Astronomers like to put things in buckets,” says Fulton. “In this case, we have found two very distinct buckets for the majority of the Kepler planets.”

Since the Kepler mission launched in 2009, it has identified and confirmed more than 2,300 exoplanets. Kepler specializes in finding planets close to their stars, so the majority of these planets orbit more closely than Mercury, which circles the sun at roughly one-third of the Earth-sun distance. Most of these close-in planets were found to be roughly between the size of Earth and Neptune, which is about 4 times the size of Earth. But, until now, the planets were found to have a variety of sizes spanning this range and were not known to fall into two size groups.

“In the solar system, there are no planets with sizes between Earth and Neptune,” says Erik Petigura, co-author of the study and a Hubble Postdoctoral Fellow at Caltech. “One of the great surprises from Kepler is that nearly every star has at least one planet larger than Earth but smaller than Neptune. We’d really like to know what these mysterious planets are like and why we don’t have them in our own solar system.”