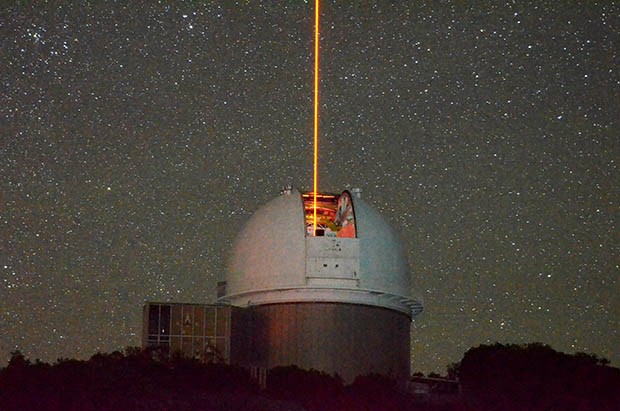 The University of Hawaiʻi‘s 2.2 meter (88-inch) telescope on Maunakea will soon be producing images nearly as sharp as those from the Hubble Space Telescope, thanks to a new instrument using the latest image sharpening technologies. Astronomer Christoph Baranec, at the UH Institute for Astronomy (IfA), has been awarded a nearly $1 million grant from the National Science Foundation to build an autonomous adaptive optics system called Robo-AO-2 for the UH telescope.

Construction of the new instrument starts at the IfA‘s Hilo facility in September, and it will be operational in just two years. The instrument will take hundreds of high-resolution images of planets, stars and asteroids every night without operators on the summit. “The new Robo-AO-2 will usher in a new age of high-resolution science in astronomy,” says Baranec, “and we’re doing it with one of the oldest and smallest telescopes on Maunakea.”

The Robo-AO-2 system will take advantage of recent renovations to the UH 2.2-meter telescope, and the superior atmospheric conditions above Maunakea, to make some of the sharpest visible-light images from the Earth’s surface. “Because Robo-AO-2 will be so versatile and capable, we’ll be able to undertake surveys of an unprecedented number of exoplanet host stars and candidate lensed quasars, and even monitor the nightly weather of our planetary neighbors—all in high-definition color,” says Baranec. The latter is particularly timely as NASA is now planning to send probes to Uranus and Neptune in the coming decades. Knowing what to expect ahead of time is a crucial element of mission planning.

Educating the next generation of astronomers

Baranec is also planning to use Robo-AO-2 to support education efforts in Hawaiʻi. “UH Hilo in particular has guaranteed time for their students on the UH 2.2-meter and I’m excited to see our local youth operating this cutting-edge technology for both classes and summer research projects,” says Baranec. In addition, time with Robo-AO-2 will also be made available to high school students through the Maunakea Scholars program, a partnership involving the Maunakea Observatories, Hawaiʻi State Department of Education and UH led by Canada-France-Hawaiʻi Telescope.

The new instrument is based on the prototype Robo-AO system developed by Baranec at Caltech, and later used with telescopes at the Palomar Observatory and Kitt Peak National Observatory. It has been an indispensable tool in confirming or revising the thousands of exoplanet discoveries made by NASA‘s Kepler mission, and in measuring the rates at which different types of stars are born into single, double, triple and even quadruple star systems.

All Robo-AO systems use an invisible ultraviolet laser to create an artificial guide star in the sky to measure the blurring caused by Earth’s atmosphere. By measuring how the atmosphere affects this artificial star, a flexible mirror in the system can be deformed to remove its blurring effects. Because light from the laser and celestial objects pass through the same atmosphere, and both are reflected off of the deformable mirror, images of celestial objects are similarly de-blurred, leading to very sharp images limited only by the same laws of physics that limit the sharpness of space-based telescopes.