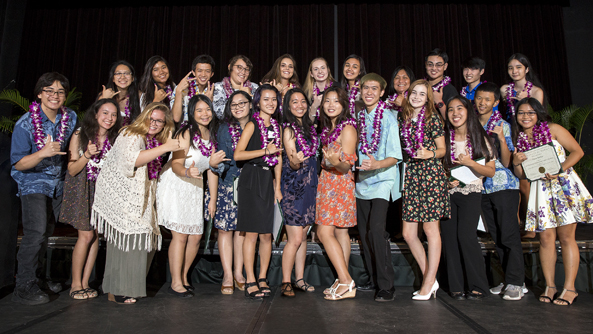 The University of Hawaiʻi honored the 2017 Regents and Presidential Scholars (RAPS) on July 20 at the UH Mānoa Campus Center Ballroom. These scholarships recognize and support Hawaiʻi students with a record of outstanding academic achievement. Many RAPS alumni are now serving communities across the globe and here at home as the program marks its 30th anniversary.

Regents scholarships are awarded to 20 outstanding incoming freshmen from Hawaiʻi high schools who demonstrate strong GPAs and national entrance exam scores, and whose extracurricular achievements are considered to be remarkable.

“The University of Hawaiʻi is proud to support these exceptional students in attaining their dreams here at home,” said UH Board of Regents Chair Jan Sullivan. “We look forward to the positive impacts our UH scholars will have on our community and the world.”

Presidential scholarships are awarded to 10 college juniors, with preference for UH community college students transferring to a UH university, who have a high GPA for all college level work, a record of sustained progress in academic courses and evidence of superior academic achievement or creative endeavor.

“These scholars have already demonstrated excellence and outstanding achievement during their first two years at UH,” said UH President David Lassner. “It is an honor to support their paths to college completion on their journey to a better future for themselves, their families and their communities.”

The UH Board of Regents established the Regents and Presidential Scholarships in 1987 to support students attending any UH campus who have a record of outstanding academic achievement and to help Hawaiʻi’s most promising students pursue their higher education ambitions in their home state. UH recently celebrated the 30th anniversary of the founding of the program by holding an alumni reunion.