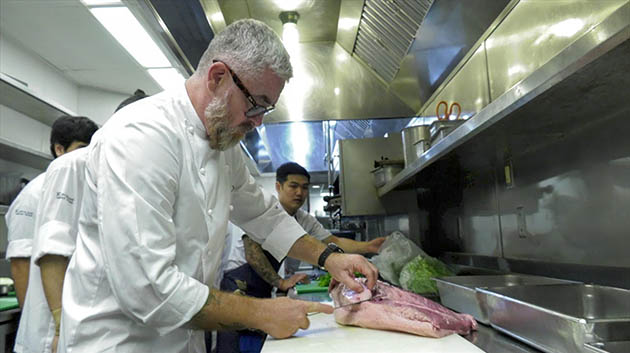 He’s been called “the worldʻs most influential chef” by Forbes and named by Time magazine as one of the most influential people in the world. His restaurants in Brazil have earned a total of three Michelin stars. He is Chef Alex Atala and Kapiʻolani Community College culinary students are awestruck.

Atala spent time with Kapiʻolani CC chefs and culinary students in July as part of the school’s new Guslander Master Chef series. They prepared for pop-up dinners to be held at the school’s Leʻahi Concept Kitchen in Waikīkī.

“To work with Chef Atala, it’s mind blowing” said Kapiʻolani CC student Reed Kikuta. “A Michelin star chef coming to work with us the students and getting to learn from him and see his flavors.”

Atala is known for his emphasis on native Brazilian ingredients. “Keep proud to be local. This is very important message,” Atala said.

While in Hawaiʻi, Atala got to sample Hawaiian foods ranging from ʻopihi to laulau.

“Hawaiian food has really impressed me for the simplicity on one hand or maybe primitivity,” Atala said. “On the other hand – (Hawaiian food’s) sophistication, complexity and deliciousness.”

His message to the students was to push local food to the next step, and that cooking is more than food.

Atala said, “Keep proud to be local. Use local flavors. And try to use your cuisine to do something delicious for who comes and you are going to serve, but always the same delicious for (those) who supply us.”

Price per person is $250.00 inclusive (with wines paired by Master Sommelier Patrick Okubo)