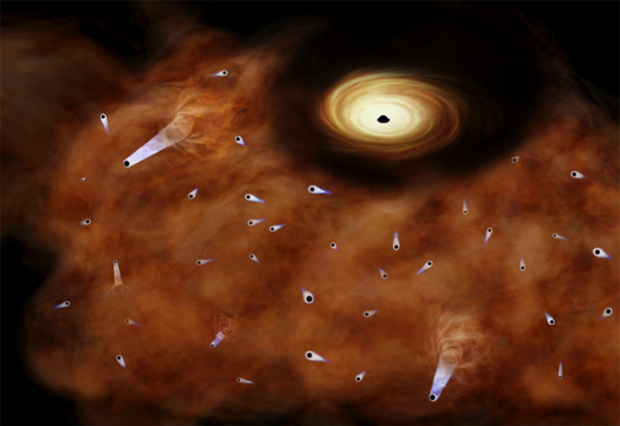 A research team led by Japanese astronomers using data taken with the James Clerk Maxwell Telescope (JCMT), have conducted detailed radio spectral observations of molecular gas around the nucleus of our Milky Way Galaxy. The team of researchers theorize that Stellar Mass Black Holes are causing two compact gas clouds towards the center of the Milky way to exhibit some highly unusual motions. The observations were taken over a period of months by telescope operators working for JCMT, which include University of Hawaiʻi alumni Callie Matulonis, Kevin Silva and Will Montgomerie.

These observations are particularly important due to the nature of these black holes. Despite being so abundant in our Galaxy—astronomers believe there may be well over 100 million stellar mass black holes in our own Galaxy—only 60 or so have been observed to date. Typically detections are made using x-rays; these observations only see the more “active” black holes, e.g. those in the process of consuming a nearby stellar neighbor. Being much smaller than the Super Massive Black Hole at the center of the Milky Way, which is about a million time more massive, makes these black holes harder to detect.

Japanese team member Shunya Takekawa said, “We expect that the number of black hole candidates will dramatically increase by applying research methods similar to this work.”

Learn more about the discovery.

More about the JCMT UH alumni

Matulonis, received her bachelors in natural science and communications from UH Hilo and her master’s in educational technology from UH Mānoa. She has worked on Maunakea for nearly 13 years fulfilling a variety of positions at several telescopes.

Silva received a BS in astronomy and BA in physics from UH Hilo. He spends more than 120 days a year atop Mauna Kea observing the night sky as a JCMT as a telescope system specialist.

Montgomerie earned a BS in astronomy, BA in physics from UH Hilo. He is an avid photographer and has produced time lapses of the sky from Maunakea.