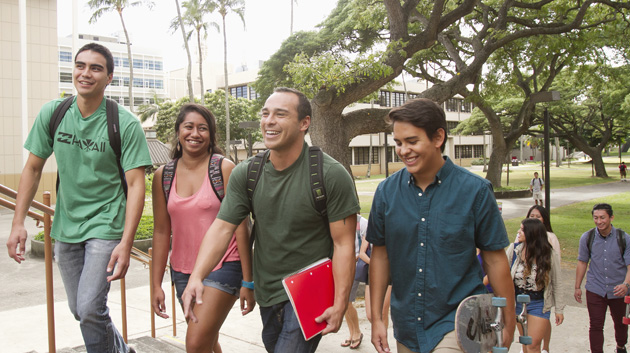 The University of Hawaiʻi at Mānoa is one of the nation’s best institutions for undergraduate education, according to The Princeton Review. The education services company features the school in the new 2018 edition of its college guide, “The Best 382 Colleges.”

“We chose the University of Hawaiʻi at Mānoa for this book because it offers outstanding academics,” said Robert Franek, Princeton Review‘s editor-in-chief and author of The Best 382 Colleges. “Our selections are primarily based on our surveys of administrators at several hundred four-year colleges. We also visit dozens of colleges each year and give considerable weight to opinions of our staff and our 24-member National College Counselor Advisory Board, Most importantly, we look at valuable feedback we get from each school’s customers—our surveys of students attending them. We also keep a wide representation of colleges in the book by region, size, selectivity and character.”

In a Survey Says sidebar in the book’s profile on UH Mānoa, The Princeton Review lists topics that UH Mānoa students surveyed for the book were in most agreement about in their answers to survey questions. The list includes: recreation facilities are great, students are happy and diverse student types interact on campus.

Only about 15 percent of America’s 2,500 four-year colleges and two colleges outside the United States are profiled in the book, which is one of The Princeton Review‘s most popular guides. Published annually since 1992, it has detailed profiles of the colleges with rating scores in eight categories. The book also has ranking lists of top 20 schools in 62 categories. All of the ranking lists are based on The Princeton Review‘s surveys of students attending the colleges.

The Princeton Review does not rank the colleges from 1 to 382 in any category. Instead it uses students’ ratings of their schools to compile 62 ranking lists of top 20 colleges in the book in various categories. The lists in this edition are entirely based on The Princeton Review‘s survey of 137,000 students (358 per campus on average) attending the colleges. The 80-question survey asks students to rate their schools on several topics and report on their campus experiences at them. Topics range from their assessments of their professors as teachers to opinions about their school’s career services.

The schools in The Best 382 Colleges also have rating scores in eight categories. The Princeton Review tallied them based on institutional data it collected during the 2016 -17 academic year and/or its student survey for the book. Rating scores are on a scale of 60 to 99. Categories include: academics, admissions selectivity, financial aid, fire safety and green, a measure of school’s commitment to the sustainability and the environment in its policies, practices and education programs.

To view UH Mānoa’s profile, go to: The Princeton Review.