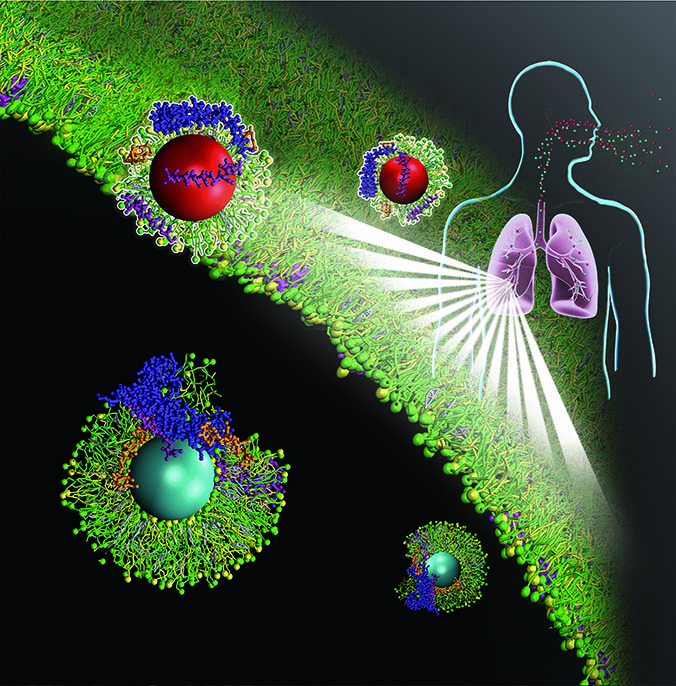 The Nanotechnology Consumer Products Inventory maintained by the Woodrow Wilson International Center for Scholars has listed 1,814 nano-enabled consumer products, many of which have a potential safety hazard if inhaled. However, their potential biological risks are still largely unknown.

University of Hawaiʻi at Mānoa College of Engineering Professor Yi Zuo has developed a new method to reveal the molecular mechanism of nano-bio interactions in the lungs. This research was published in the July 2017 issue of the scientific journal ACS Nano, “Unveiling the molecular structure of pulmonary surfactant corona on nanoparticles.”

“Molecular scale interactions between nanoparticles and biomolecules are too small and too fast to be visualized by most conventional experimental methods,” Zuo said. “Hence, we studied the nano-bio interactions with a virtual experiment called molecular dynamics simulations. Using supercomputers, we created a virtual box in which a certain number of molecules and particles can move and interact with each other for a certain time by following the natural laws of physics and chemistry. The final equilibrium state of the simulation reveals the molecular mechanism of nano-bio interactions.”

This study may also advance the understanding of other air pollutants, such as vog, an air pollutant that is unique to Hawaiʻi. Given the environmental, health and safety impact of vog, there is an urgent need to understand its pulmonary risk, especially to those with existing respiratory conditions and children, whose respiratory system is significantly more vulnerable to particle invasion than adults.

Zuo is continuing to study the molecular mechanism of nano-bio interactions using molecular dynamics simulations and novel experimental techniques developed in his Laboratory of Biocolloids and Biointerfaces, helping to provide a useful metric for regulating and overseeing commercial applications of nanotechnology toward a safer and more sustainable development.

Zuo’s research was conducted in collaboration with Professor Guoqing Hu of the Chinese Academy of Sciences with financial support from the National Science Foundation and the Hawaiʻi Community Foundation.