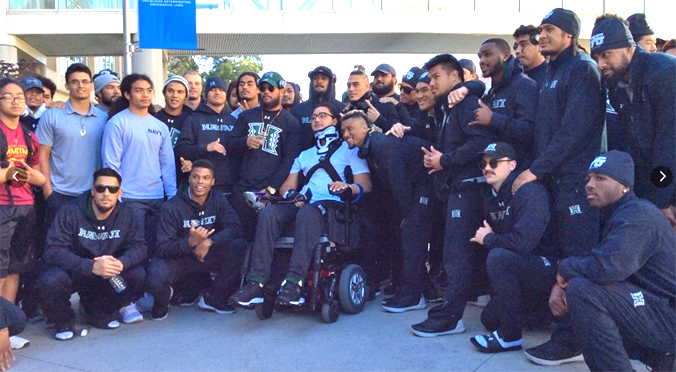 After a six-hour flight from Honolulu to Denver, the University of Hawaiʻi at Mānoa football team made a short drive to Craig Hospital for an emotional visit with teammate Kalepo Naotala, who is undergoing spinal cord rehabilitation.

Nearly 90 players, coaches and support staff greeted Naotala and his family with hugs and handshakes. The group shared stories and laughs with the defensive lineman, who in his short time in Mānoa, made an immediate impact on the Rainbow Warriors. The team sported beenies with Naotala’s jersey number 75 and the slogan “Back and Better,” a phrase that he uttered to Rolovich days after his accident.

Naotala, a freshman from Virginia who gray-shirted in 2016, suffered a serious spinal cord injury on July 1, 2017, while diving with friends near Waikīkī. He was rescued from the water, and received treatment at The Queen’s Medical Center before being transferred to Craig Hospital.

“Kalepo was with us for 6 to 8 months and he impacted our program greatly,” head coach Nick Rolovich said. “As you can see from our guys, for a lot of them it was the first chance they got to see him since the hospital so it’s meaningful, it’s important. I think it’s great for Kalepo knowing he’s still a part of our team.”

For more on this story, go to the UH Mānoa Athletics website.