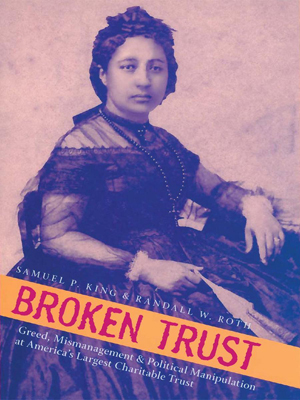 As part of its ongoing open-access initiatives, University of Hawaiʻi Press has released Broken Trust: Greed, Mismanagement and Political Manipulation at America’s Largest Charitable Trust, one of its best-selling titles in a free, online format. With the encouragement of the book’s coauthor, recently retired UH Mānoa William S. Richardson School of Law Professor Randall Roth, and with the support of Kamehameha Schools, the open access edition of Broken Trust is freely available to download or read on multiple platforms, including the ScholarSpace open-access, digital institutional repository; Amazon Kindle; Google Books; and Apple iBooks version.

The open access edition has an added introduction with remarks by Roth and the current Kamehameha Schools trustees, and includes Roth’s eulogy for coauthor Samuel P. King, the late federal judge who passed away in December 2010.

Published in 2006 and still in print as a paperback, Broken Trust examines the landmark events of the late 1990s set off by the publication of the “Broken Trust” essay in the Honolulu Star-Bulletin that exposed mismanagement of the Princess Bernice Pauahi Bishop trust and of its beneficiary, Kamehameha Schools.

Written by King, Roth and three respected kūpuna, the essay led to the empowerment of the school’s wider community and historical changes in the selection of Bishop Estate trustees.

Release of the book in open-access format will make this history accessible to an even wider audience than previously and facilitate use in educational settings. In addition to primary source documents, educators can find lesson plans, discussion questions and legal issues.