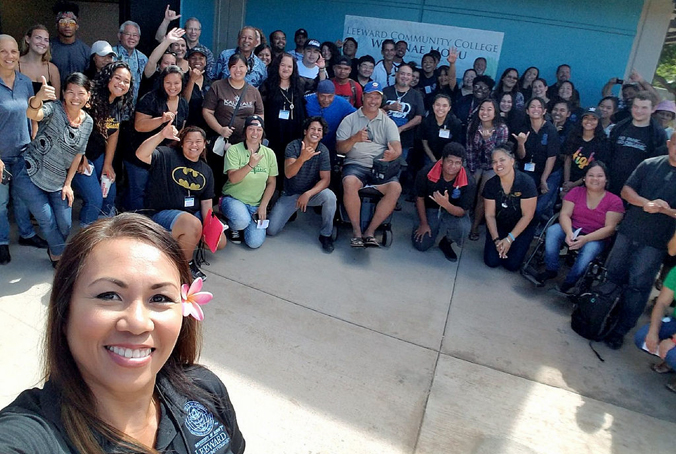 “The dedication of Leeward Community College Waiʻanae Moku is the celebration of a dream realized. It’s been over 40 years since Leeward Community College began the journey of serving our Leeward Coast ʻohana. To finally have a permanent facility in Māʻili to call home is the culmination of the efforts of many and the beginning of a new opportunity to expand programs and to meet the present and future needs of the community,” said Leeward CC Chancellor Manny Cabral.

Work began on the renovation in May 2016. Phase I was completed in August 2017, just in time for fall 2017 classes. Phase II is currently under design and anticipated start of construction is estimated to be early summer 2018.

The Waiʻanae Moku center offers a full range of learning support services and more than 65 credit classes during the fall and spring semesters. Students can complete their entire associate’s in arts degree without leaving Waiʻanae. Phase II will provide additional opportunities for the students. A full range of learning support services are offered by two full-time support specialists. Student enrollment has increased dramatically, from 229 headcount in 2006 to more than doubling to 545 in 2015.

“This is just the beginning of how we are transforming higher education on the Waiʻanae coast,” said Center coordinator Danny Wyatt. “With Phase II, we’ll be able to provide even more services to our students and increase course offerings. We’re eager to see what the future holds. We’re only using half the building right now. Imagine what we’ll be able to do when the renovation is complete!”

“The acquisition and renovation of a permanent home for the Waiʻanae Moku center took the collaborative contributions, efforts and perseverance of so many people over the last several years—from legislators, UH and UHCC system personnel and many others at the campus and community levels,” said Mark Lane, Leeward CC vice chancellor of administrative services. “We are indeed fortunate and thankful to all those individuals who have contributed to this new beginning of serving the higher education and workforce development needs of the Waiʻanae coast.”

See more photos from the first week of operations at the Waiʻanae Moku Education Center.

The Waiʻanae-Nānākuli Education Center (WNEC) began operations in April 1970 as part of Honolulu’s Model Cities Project under the auspices of the Department of Education. In January 1972, the University of Hawaiʻi took over as the operating agency, administering WNEC through Leeward Community College. In 1977, WNEC was fully integrated into Leeward’s operations and organization.

For 21 years, the center was housed in temporary rental locations, including the Nānākuli KFC, Waiʻanae High School classrooms, the Satellite City Hall and the old Waiʻanae Hardware building. In 1991, the center found a semi-permanent residence at the Waiʻanae Mall, leasing a large portion of the two-story office building behind Cathay Inn.

The dream of a permanent facility became a reality when the state purchased the 2.5 acres that housed the 38,600-square-foot vacant Tycom building on Kulaʻaupuni Street next to Māʻili Elementary School for $2.5 million in 2014. The Legislature then appropriated $3 million for phase-one renovations. Leeward CC also received a $10 million federal grant for both its Pearl City and Waianae locations, some of which will be used for phase-two work.