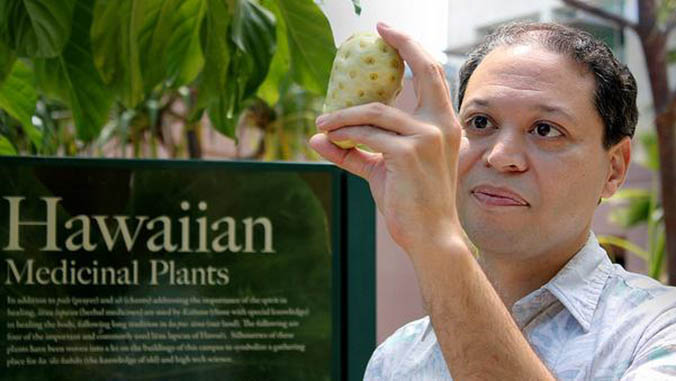 Alika Maunakea is leading a study to scientifically prove what seems apparent to many: Social and economic forces in a community can impact health.

Maunakea, assistant professor at the John A. Burns School of Medicine at the University of Hawaiʻi at Mānoa, is conducting the study in a place he knows well: Waiʻanae, where he was born and raised.

His hometown has the largest proportion of health disparities in the state.

Obesity, diabetes, smoking and alcoholism are more prevalent within places like Waiʻanae, with high populations of Native Hawaiians or Pacific Islanders. Incomes there are below the median, and the way of life, which generations ago centered on harvesting food from the land and sea, has been disrupted by rapid change and urbanization.

Through his specialty, epigenetics, Maunakea seeks to understand the molecular interaction between the environment and genes, and how changes in this interaction are involved in diseases that are disproportionately prevalent in Native Hawaiian and Pacific Island populations—changes that are not due to differences in genetics.

Maunakea’s colleague in the study is Ruben Juarez, an associate professor in the UH Mānoa Department of Economics and UH Economic Research Organization. He is a mathematical economist researcher with expertise in social networks and behavior.

Because Maunakea and Juarez believe social and economic forces can push people toward unhealthy lifestyles, their study won’t be confined to the walls of the university.

“The impact of socioeconomic networks on diseases of health disparities in Hawaiʻi has never before been measured,” said Maunakea. “We hope to provide the first measure in the state of Hawaiʻi.”

College of Social SciencesgeneticshealthJohn A Burns School of MedicineUH Manoa