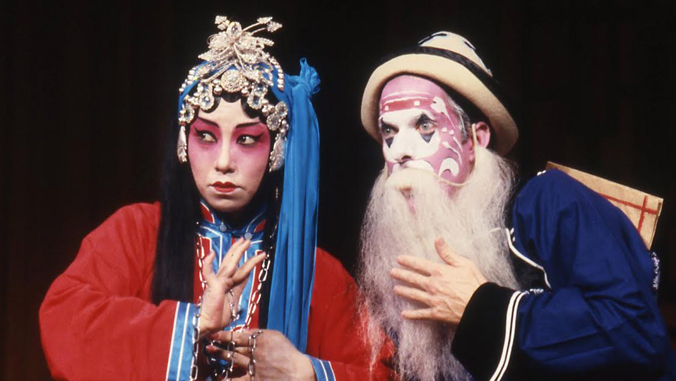 The University of Hawaiʻi at Mānoa’s Department of Theatre and Dance presents Fights & Delights: Three Chinese Comedies, co-directed by Elizabeth Wichmann-Walczak and Mark Branner, in February. Celebrating the chou—or comic—character, the three plays are filled with acrobatic contortions, mistaken identities, adorable lovers and exhilarating battles. This production highlights the vibrancy of traditional Chinese theatre and opens at Kennedy Theatre Mainstage on February 16—Chinese New Year. Performances run February 16, 17, 23 and 24 at 7:30 p.m., and on February 18 and 25 at 2 p.m.; free pre-show chats will be held on February 17 and 24 at 6:45 p.m. February 17 is Throwback Saturday, with tickets only $5 to $15. Regularly priced tickets are $8 to $25. Fights & Delights will be performed in English.

The three Chinese comedies featured in Fights & Delights are: the chuanju, “Pi Jin Rolls the Lamp” and two jingju “Treasure in the Chest” and “Where Three Roads Meet.”

“Treasure in the Chest” tells the story of a young woman whose mother and brother leave home to arrange a marriage for her. While they are gone, a young scholar arrives and begs her to save him from two officers hot on his trail. “Pi Jin Rolls the Lamp” recounts the tale of a wife punishing her husband for his gambling problem. The wife, with the help of her daughter, compels her husband to perform spectacular acrobatics while balancing an oil lamp on his head. “Where Three Roads Meet” relates a story about the famous Chinese general, Jiao Zan, in which he has killed a traitor and is traveling into exile under armed guard. It features a comic innkeeper and his clever wife, two comedic officers and a young warrior determined to protect Jiao Zan.

Fights & Delights is the twelfth traditional Chinese theatrical production performed at Kennedy Theatre since it opened in 1963. In the 1980s, UH Mānoa alumna and Professor of Asian Theatre Wichmann-Walczak became the director of the department’s Asian Theatre Program and began the tradition of producing xiqu (pronounced she-chew)—indigenous or traditional Chinese theatre or “opera”—every four years at Kennedy Theatre. The student performers’ high skill-level has remained consistent throughout the years. They receive 4 to 8 months of intensive training in song, speech, dance, acting and combat, all taught by leading artists from China. Said Wichmann-Walczak, “To me this high level of skill is the most astonishing thing about these productions. It is still very rare for Chinese theater to be performed in the English-speaking world, and even more unusual for such performances to result from a long-term, intense and rigorous training program like this one.”

Ticket prices include all service fees.

Tickets for Fights & Delights: Three Chinese Comedies are available online, by phone at (808) 944-2697, at participating outlets and at the Kennedy Theatre box office. Sales at the Kennedy Theatre Box Office begin on February 12, 10 a.m. to 1 p.m. Monday through Friday with extended sales hours on show days.