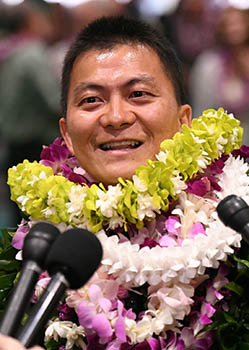 University of Hawaiʻi at Mānoa graduate Ken Kang, who helped develop the STEM program at ʻAiea High School, was presented with a Milken Educator Award on February 5.

Kang earned a bachelor’s degree in electrical engineering from UH Mānoa in 1997 and a post-baccalaureate degree in secondary education and educational technology in 2005. He is the technology coordinator at ʻAiea High, his alma mater, and started the school’s first STEM class in 2015. STEM stands for science, technology, engineering and math.

Hawaiʻi Schools Superintendent Christina Kishimoto and Milken Educator Awards Senior Vice President Jane Foley presented the $25,000 award to Kang during an assembly at ʻAiea High School. Kang is the only Milken recipient from Hawaiʻi this year and is one of 44 nationwide in the 2017–2018 school year.

“Ken Kang was a working engineer before returning to his old school and turning his mind’s eye to educational technology solutions,” said Foley.

“Ken’s diligent work in improving technology resources and training his fellow teachers has advanced ʻAiea High and all the schools in the ʻAiea complex and shaped students’ passion for STEM learning,” said Kishimoto. “His devotion to his alma mater is tremendous, and we congratulate and thank him for being such an inspiration for our students.”