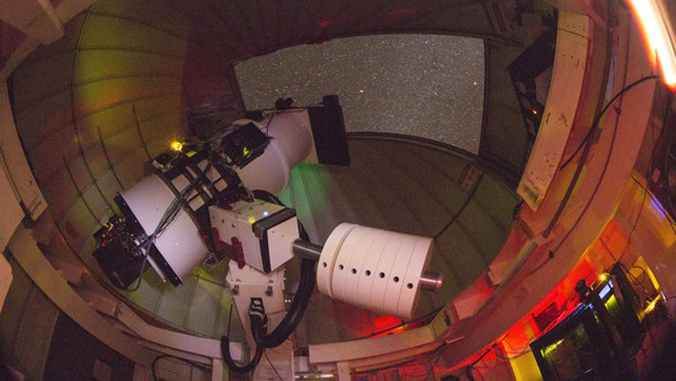 ATLAS is an asteroid impact early warning system being developed by the UH Institute for Astronomy (IfA) and funded by NASA. It consists of two telescopes, 100 miles apart, which automatically scan the whole sky several times every night looking for moving objects. ATLAS was not looking for the Roadster—it was found during routine observations and automatically identified as a near-Earth object.

We were lucky to catch the Roadster before sunrise during our regular observing. This really demonstrates the power of our system to find small objects that could hit Earth.
—Larry Denneau

The Tesla Roadster was seen as a moving object in four separate observations. After it was detected by the automatic software system, the object’s positions were submitted to the International Astronomical Union Minor Planet Center, which is responsible for determining the orbits of asteroids and other small solar system objects. It was immediately identified as the recently launched Tesla Roadster. ATLAS’ orbit determination software pinned down the orbit from the four observations, measuring it about 0.005 astronomical units (about 500,000 miles) from Earth, speeding away at about 3.6 km/sec (8,000 mph).

“We were lucky to catch the Roadster before sunrise during our regular observing. This really demonstrates the power of our system to find small objects that could hit Earth, and accurately measure their orbits to see if they’re dangerous,” said Larry Denneau, IfA’s principal investigator for the ATLAS project. Denneau said their mission is designed to look for things coming toward Earth, but this time investigators found something going away from Earth. “As a fan of what SpaceX is doing, it is fun to be a part of advances in science,” he said.

Falcon Heavy, billed as the most powerful rocket in the world, lifted off from the Kennedy Space Center in Florida February 6. Falcon Heavy’s payload was a midnight-cherry-colored Tesla Roadster owned by SpaceX CEO and lead designer Elon Musk.