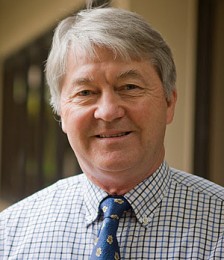 Seven years after a renowned University of Hawaiʻi law professor’s untimely death, hundreds of legal papers and documents chronicling his vast research topics—ranging from Pacific disarmament to the law of the sea to Native Hawaiian rights—will be available to scholars and law students at the UH Law Library.

The UH law library will unveil a searchable database of his 35-year career at a reception on March 4, 2018, from 4 to 6 p.m. The papers include specifics of his lawsuit filed on behalf of victims who suffered under the regime of former Philippines President Ferdinand Marcos, as well as his work on sea level rise and nuclear waste disposal in the Pacific.

Vicki Szymczak, law library director and an associate professor, said the law school’s meticulous document preservation process entails freezing the papers to eliminate microbes, bacteria and mold. “Once they are removed from the freezer, they are indexed and tabbed and placed into acid-free folders and acid-free boxes,” said Szymczak. “The permanent resting place for the documents is our intensive storage room, which has a separate chilling unit.”

The UH law library received a grant from the Hawaiʻi Council for the Humanities to process the papers of Van Dyke, who died November 29, 2011, in his sleep in Australia, where he was scheduled to give the keynote address at an ocean law conference.

In addition to the electronic database, researchers are welcome to make an appointment to gain access to the collections by calling: (808) 956-2867.