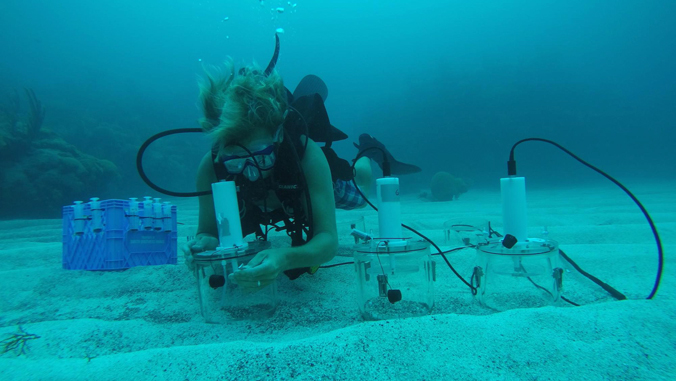 Many of the world’s coral reefs could begin to erode within 30 years as a result of increasing ocean acidity, according to a paper in Science co-authored by two researchers from the University of Hawaiʻi at Mānoa’s School of Ocean and Earth Science and Technology (SOEST) and others.

Lead author Bradley Eyre from Southern Cross University and co-authors found that sands, which provide material for building and maintaining coral reefs, will begin to dissolve due to increasing ocean acidity. In addition, their paper shows coral reef sediments dissolve at a rate that is ten times more sensitive to ocean acidification than the rate at which corals grow.

“This study clearly shows that dissolution of coral reef sands is an important process that is ongoing in various locations throughout the world,” said co-author Eric DeCarlo, a SOEST professor of oceanography. “However, this process, which is an important factor in determining whether coral reef platforms will continue to accumulate or begin to disappear, had largely been ignored prior to this work.”

Coral reef ecosystems are critical for tourism, fisheries and many other human activities worldwide. The global oceans have absorbed around one third of the carbon dioxide (CO2) emitted to the atmosphere and have become increasingly acidic as a result—jeopardizing the future of these beneficial ecosystems.

“It is vital that we put pressure on governments globally to act in concert to lower CO2 emissions, as this is the only way we can stop the oceans acidifying and dissolving our reefs,” Eyre said.

The researchers used an instrument called a benthic chamber to measure the impact of future seawater acidity in dissolving the sands that make up coral reef systems. They placed 57 chambers underwater at four locations in the Pacific and Atlantic oceans, including a coral reef monitoring site in Kāneʻohe Bay maintained by DeCarlo.

Patrick Drupp, co-author of the paper and a UH oceanography graduate student at the time of the study, also participated in the field work in Kāneʻohe Bay. Through boat and dive operations, the Kāneʻohe team collected field samples and completed sample processing and analysis on shore.

The research team then developed a model extrapolating their results for 22 coral reefs across ocean basins.

Once oceans reach a tipping point in acidity, the reef sediments begin to dissolve faster than they accumulate. The time it takes to reach this threshold will depend on the rate of seawater acidification on the reefs.

“It may be possible to reduce the impact of ocean acidification on the dissolution of reef sediments by managing the input of organic matter at local and regional scales, providing some hope for reefs, but much more research on this topic is required,” Eyre said.