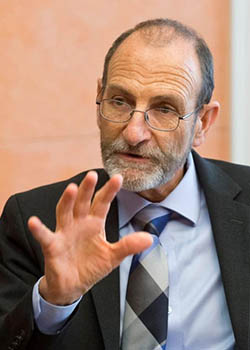 Christopher Field, one of the top three most cited scientists in the world on climate change issues, will address the need to find a global accelerator pedal for climate solutions. The free lecture titled “Climate Change Impacts and Solutions: Finding the Accelerator Pedal” will be held on Friday, March 16, 3–4:30 p.m. in the University of Hawaiʻi at Mānoa Art Auditorium.

Field is the Perry L. McCarty Director of the Stanford Woods Institute for the Environment and the Melvin and Joan Lane Professor for Interdisciplinary Environmental Studies at Stanford University. He is the author of more than 300 scientific publications on diverse topics surrounding climate change, including climate modeling, developing renewable energy systems and involvement of community organizations to minimize climate-related risk.

Field was co-chair of the United Nations Intergovernmental Panel on Climate Change from 2008–2015 and was one of two Americans to represent the Intergovernmental Panel on Climate Change at the 2007 Nobel Prize ceremonies. These and other efforts were central to the work that led to the 2015 Paris Agreement, in which 174 nations agreed to keep global warming within 2°C above pre-industrial levels.

He is a member of the U.S. National Academy of Sciences, has briefed U.S. Congressional committees on climate-change impacts and earned numerous honors for his work, including the Max Planck Research Award, the BBVA Frontiers of Knowledge Award, the Roger Revelle Medal, the Stephen H. Schneider Award and the Stanford Sidney and Skippy Frank Prize, among others.

The lecture is sponsored by the Geography Department in the College of Social Sciences at UH Mānoa as part of the 2018 Geography Distinguished Lecture Series.