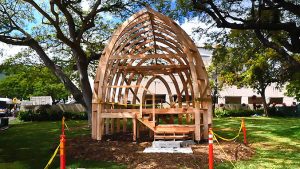 The wooden structure, which echoes the Waikīkī Shell or a Samoan fale, on the corner of University Avenue draws plenty of curious stares. A former doctoral student’s dream is now a full-sized reality near the School of Architecture at the University of Hawaiʻi at Mānoa. Joey Valenti’s award winning idea to build an innovative temporary housing unit out of invasive albizia has come to fruition.

“I think itʻs going to be a gamechanger for Hawaiʻi in a lot of ways,” says Valenti, now serving as project manager for the UH Office of Sustainability’s Albizia Project.

The prototype was constructed as a proof-of-concept of a single-family low-income shelter made from albizia, reconceptualizing the invasive species as a useful building material. It utilizes a design-build process that integrates state-of-the-art wood engineering technology and digital fabrication to pilot a Hawaiʻi-based system of sustainable wood structures.

In 2016, the UH president’s green project implementation $10,000 award from Johnson Controls kick-started funding for what was Valentiʻs doctor of architecture project, a scale model home. Since then, the UH Office of Sustainability has raised about 10 times that amount to build the full-scale prototype, including funding from the Hawaiʻi Housing Finance Development Corporation.

“It’s a really great example of the type of integrated systems thinking that sustainability demands,” said UH System Sustainability Coordinator Matthew K. Lynch. “We’re excited about all the support weʻve gotten and all the excitement that the project has generated.”

The current albizia house has proven that the invasive tree could be used as a local building material. Future questions are economic feasibility and possible economies of scale. The goal is also to expand the project beyond albizia to other locally abundant species.

“We’re very cognizant of making sure we don’t create demand for an invasive species,” Lynch said. “We are thinking about this in a way that sort of mimics natural succession and evolution processes in nature. So if we can figure out how to create drivers for the removal, what then is the next step to replant, restore and repair our native ecosystems?”