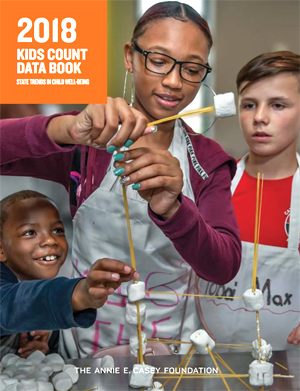 Hawaiʻi falls in the middle range on overall child well-being, ranking 24th out of 50 states according to the 2018 KIDS COUNT® Data Book, released June 27 by the Annie E. Casey Foundation.

The KIDS COUNT® Data Book—which examines trends in child well-being across areas that represent what children need most to thrive—found that while there have been some gains on education measures, Hawaiʻi still falls behind in the education domain, ranking 37th in the nation.

“Reading and math proficiency rates have seen improvements over the past decade,” said Ivette Rodriguez Stern, the Hawaiʻi KIDS COUNT project director at the University of Hawaiʻi at Mānoa’s Center on the Family in the College of Tropical Agriculture and Human Resources. “But our proficiency rates are still below the national average and Hawaiʻi has hovered in the bottom third in the country when it comes to education for a good part of the decade. This signals a need for greater investments in our public education if we’re going to work toward greater improvements.”

Findings in other domains

The annual Data Book uses 16 indicators to rank each state across four domains—education, economic well-being, health and family and community.

Not every child counted

This year’s KIDS COUNT® Data Book also calls attention to the roughly 4.5 million young children in the United States who live in neighborhoods where there is a high risk of failing to count kids in the 2020 census. In Hawaiʻi, about 39 percent of children under five years live in hard-to-count census tracts.

An undercount of young children in the upcoming decennial census would short-change child well-being over the next decade by putting at risk hundreds of millions of dollars of federal funding for programs that are critical to family stability and opportunity, including Head Start, SNAP, school lunches and child care subsidies. Based on census data, Hawaiʻi receives more than $630 million annually in federal funding for programs that impact children.

For more information, read the Center on the Family’s news release or download the 2018 KIDS COUNT® Data Book or Hawaiʻi‘s profile (PDF).