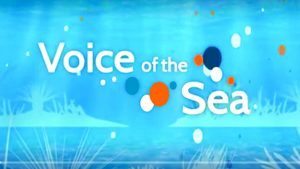 The Voice of the Sea television series, produced by the University of Hawaiʻi Sea Grant College program, won two 2018 Telly Awards for educational episodes focused on sea-level rise and coastal erosion in Hawaiʻi.

The Telly Awards honor excellence in local, regional and cable TV programming. Voice of the Sea was selected for awards out of a highly competitive field of more than 12,000 entries from all 50 states and 5 continents.

Voice of the Sea won a silver Telly for the episode “Sea Level Rise and the Ala Wai Canal,” which highlights how rising sea levels in Waikīkī will impact the state’s critical infrastructure and fresh water supplies. The episode also showcases Sea Grant’s popular citizen science program: the Hawaiʻi and Pacific Islands King Tides Project.

The program was awarded a bronze Telly for the episode “Coastal Erosion on Maui.” It examines West Maui’s eroding beaches—where large condominiums are being threatened by loss of sand and severe erosion—and interviews Sea Grant faculty who are partnering with the community to develop viable solutions.

“This award-winning television show, now in its fifth season, has been engaging and inspiring viewers of all ages throughout the Pacific since it began,” said Sea Grant Director Darren T. Lerner. “I am so proud of all of the recognition the show is receiving and, as importantly, am thrilled that it is such an effective way for many organizations to share with the community the fascinating work that is occurring each and every day.”

More on Voice of the Sea

Voice of the Sea promotes ongoing scientific and cultural work in the Pacific from recognized experts and helps increase awareness, interest and knowledge of marine science. The half-hour television series airs on Saturdays at 4 p.m. and Sundays at 5:30 p.m. on K5 The Home Team.

The Voice of the Sea television series is a signature project of the UH Sea Grant Center for Marine Science Education, produced in collaboration with the UH Mānoa College of Education‘s Curriculum Research and Development Group and the National Oceanic and Atmospheric Administration.